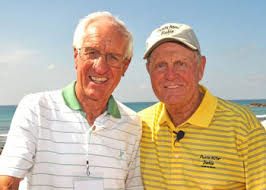 “There have been only a handful of people in my life, who I can say with conviction influenced me both inside and outside the ropes. It’s been well documented how Jim and I forged a special relationship at the 1990 Tradition, when his keen eye and his knowledge of the game–and my game–helped me find myself that week and led to my first senior victory. It was at that point after Jim first worked with me, that he came to me and said, ‘Jack, you have got a legacy in the game of golf, and don’t you think that legacy should be documented and used?’ And I said, ‘Yes.’ Jim then took it upon himself to be the messenger of that legacy. So we started the Nicklaus-Flick Golf Schools, but more important, a close friendship that has lasted for decades. The word legacy is fitting for Jim, because he cared about teaching young people as much as anyone. As an ambassador and caretaker of the game of golf, Jim loved the sport and simply wanted to share it with the world. He has not only touched my life and career, but he has influenced hundreds, if not thousands, of people over the years.
“Jim should be remembered as one of the all-time great teachers. He is one of the few who you could say really ‘got it.’ Jim was someone who understood that the game of golf was played with the golf club and not the body. He was a great teacher, a great man, and a great friend. Barbara and I will miss him a lot.”