Beginning in 2018, championship dates will permanently move to early June 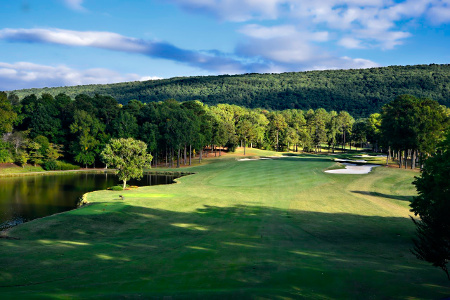 Far Hills, N.J. (May 27, 2014) — Shoal Creek, located near Birmingham, Ala., has been selected by the United States Golf Association to host the 2018 U.S. Women’s Open Championship, May 31-June 3.
“Shoal Creek has a great track record as a championship site and the USGA is quite pleased to partner with the club for a U.S. Women’s Open,” said Daniel B. Burton, USGA vice president and chairman of the Championship Committee. “We regard Shoal Creek as a wonderful test of golf and are confident it will again shine as a competitive venue for a USGA national championship.”
The 2018 U.S. Women’s Open will be the third USGA championship conducted at Shoal Creek. In 1986, Stewart “Buddy” Alexander won the U.S. Amateur Championship, defeating Chris Kite, 5 and 3, in the final. In 2008, Cameron Peck captured the U.S. Junior Amateur, and his 10-and-8 victory over Evan Beck stands as the largest winning margin in Junior Amateur championship-match history.
“Shoal Creek is deeply honored to host the greatest women’s golf championship in the world,” said Shoal Creek president Mike Thompson. “We feel that hosting the 2018 U.S. Women’s Open is a testimony to the quality of our golf course and the dedication of our members. We hope it is a great event for the golf fans of Alabama, the Southeast and beyond. We thank the USGA for the opportunity to work together on this prestigious championship.”
Additionally, beginning in 2018, the USGA will move the U.S. Women’s Open to dates in advance of the U.S. Open.
“Conducting the U.S. Women’s Open earlier in the year will allow the USGA to provide optimum playing conditions for the world’s best players across a broader variety of the country’s finest golf courses,” Burton said.
The U.S. Women’s Open has been held prior to the U.S. Open only three times in its 69-year history, all within a five-year period. Pine Needles Lodge & Golf Club, in Southern Pines, N.C., hosted the 1996 championship from May 30–June 2, and the 2001 championship from May 31–June 3. Old Waverly Golf Club, in West Point, Miss., hosted the 1999 championship from June 3–6.
Shoal Creek was designed by Jack Nicklaus and opened for play on Nov. 1, 1977, with three U.S. Open champions—Hubert Green (1977), Nicklaus (1962, 1967, 1972, 1980) and Jerry Pate (1976)—playing in the inaugural round.
Beyond its USGA history, Shoal Creek boasts a long legacy of championship play. The club hosted the 1984 and 1990 PGA Championships, won by Lee Trevino and Wayne Grady, respectively. Since 2011, Shoal Creek has served as the venue for the Regions Tradition, a major on the Champions Tour. Kenny Perry won the 2014 championship on May 18, while Tom Lehman (2011–12) and David Frost (2013) have also won the event.
Shoal Creek has also hosted numerous collegiate events, including the 1978 Southeastern Conference Championship and the Jerry Pate Intercollegiate Invitational, as well as several state and regional amateur events, including the 2010 Southern Amateur Championship.
The 2018 U.S. Women’s Open will be the sixth USGA championship conducted in the state of Alabama. Most recently, the Country Club of Birmingham hosted the 2013 U.S. Mid-Amateur Championship won by Mike McCoy. Lakewood Golf Club, in Point Clear, hosted the 1974 and 1986 U.S. Senior Women’s Amateur Championships, won by Justine B. Cushing and Constance Guthrie, respectively.
Considered the world’s premier women’s golf championship, the U.S. Women’s Open is one of 13 national championships conducted annually by the USGA. It is open to professional female golfers and amateur females with a Handicap Index® not exceeding 2.4. The championship was first conducted in 1946 and boasts an impressive list of winners, including Babe Didrikson Zaharias, Betsy Rawls, Mickey Wright, Hollis Stacy, Amy Alcott, Meg Mallon, Annika Sorenstam, Se Ri Pak, Juli Inkster, Cristie Kerr and Paula Creamer, as well as two-time and defending champion Inbee Park.
The 2014 U.S. Women’s Open will be contested on the famed Course No. 2 at Pinehurst Resort & Country Club in the Village of Pinehurst, N.C., as part of the historic back-to-back championships, one week after the U.S. Open is played on the same course. The 2015 U.S. Women’s Open will be conducted at Lancaster (Pa.) Country Club on July 9–12, the 2016 championship will be conducted July 7–10 at CordeValle in San Martin, Calif., and the 2017 U.S. Women’s Open will be conducted July 13–16 at Trump National Golf Club in Bedminster, N.J.
About the USGA
The USGA conducts the U.S. Open, U.S. Women’s Open and U.S. Senior Open, as well as 10 national amateur championships, two state team championships and international matches attracting players and fans from more than 160 countries. Together with The R&A, the USGA governs the game worldwide, jointly administering the Rules of Golf, Rules of Amateur Status, Equipment Standards and World Amateur Golf Rankings. The USGA’s reach is global, with a working jurisdiction comprises the United States, its territories and Mexico, serving more than 25 million golfers and actively engaging 150 golf associations.
The USGA is one of the world’s foremost authorities on research, development and support of sustainable golf course management practices. It serves as a primary steward for the game’s history and invests in the development of the game through the delivery of its services and its ongoing “For the Good of the Game” grants program. Additionally, the USGA’s Course Rating and Handicap systems are used on six continents in more than 50 countries.
For more information about the USGA, visit www.usga.org.