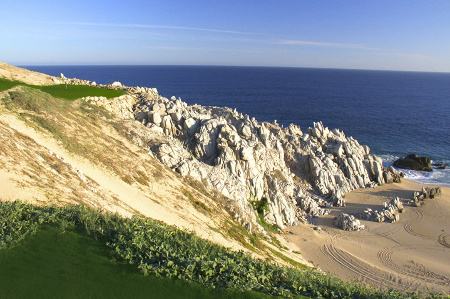 Spectacular Jack Nicklaus Signature Golf Course scales the heights at Land’s End
Los Cabos, Mexico – In a dramatic setting at the tip of the Baja Peninsula, marked by windswept dunes, sheer cliffs and desert foothills 10 minutes from downtown Cabo San Lucas, Jack Nicklaus has crafted a golf course that is poised to redefine the Cabo golf experience. Quivira Golf Club is the centerpiece of Quivira, the newest luxury development in Los Cabos, which encompasses two resorts—Pueblo Bonito Pacifica Resort & Spa and Pueblo Bonito Sunset Beach Resort & Spa—and three high-end real estate communities:  Montecristo Estates Luxury Villas by Pueblo Bonito, Copala, and Novaispania Residences.
“Our team has worked with the canvas Mother Nature provided to create what we hope is one of the most spectacular courses in the world,” Nicklaus said of Nicklaus Design’s sixth course in Los Cabos. “This property afforded us a rare opportunity because of its topographic diversity and natural environment.”
The formal opening of the 7,224-yard, par-72 layout on October 1 will mark a watershed moment in the history of golf development in Los Cabos, a destination revered for its consistently sunny weather and unique mountain-desert-ocean ecosystem. In addition to its stunning panoramas and breathtaking drops from tee to fairway, Quivira offers players more oceanfront exposure than any other course in Los Cabos. All 18 holes feature outstanding vistas of the Pacific and, in the winter months, views of breaching whales.
The $40 million golf facility at Quivira, more than eight years in the making, commences at sea level near the rolling surf before climbing to a highest point of more than 350 feet above sea level, where the views are a match for the challenge. During the round, players can refresh themselves at four comfort stations interspersed throughout the all-inclusive facility. A halfway house situated near the eighth green, called “The Oasis,” will showcase the culinary talents of the resort’s chefs, with tuna sliders, fish tacos and Mexican specialties available.
The first three holes at Quivira head inland away from the sea before reversing direction at the par-5 fourth hole, which plays over a pond to a broad fairway framed by rolling dunes and raw desert.
The three-quarter mile drive to the fifth hole, which crosses arroyo-spanning bridges and traces a switchback route up the side of a mountain, has already been dubbed the “Greatest Drive in Golf.” At more than 200 feet above sea level, the tee at the short par-4 fifth hole offers splendid views of the beach and crashing waves far below. The par-3 sixth, its concave cliff-top green carved from the base of a massive dune, is equally dramatic. The layout then weaves through the dunes, returns to the cliffs at the dazzling par-3 13th hole, proceeds inland through the desert toward distant mountain peaks, and drops sharply from a set of elevated tees at Nos. 16 and 17, a pair of thrilling par 4s. Quivira’s par-4 18th hole, stretching to 469 yards, is a classic links-style creation that plays to an infinity-edge green overlooking the sea.
Completing the experience at Quivira Golf Club is a stylish, thatched-roof clubhouse between the first tee and 18th green that offers a large rectangular bar, a casual steakhouse, and ample outdoor seating overlooking the sea. Beside the clubhouse is a spacious double-ended practice facility that parallels the ocean, as well as an elongated practice putting green and an expanded short-game practice area.
Quivira Golf Club is accessible to guests of the four Pueblo Bonito Oceanfront Resorts and Spas in Los Cabos, and to owners of properties in Copala, Montecristo Estates Luxury Villas, and Novaispania Residences. Each of the Pueblo Bonito Resorts welcomes guests with lavish accommodations, unsurpassed service, fine dining and a host of on-site amenities. Complimentary shuttle service to and from Quivira Golf Club will be included within the Quivira development.
For reservations, tee times or further information access the web site at www.pueblobonito.com.
About Quivira Los Cabos
Quivira (pronounced key-vee-ra), Mexico’s premier luxury residential resort community, is situated at Land’s End on the Baja Peninsula, with more than three miles of pristine golden beaches, picturesque desert cliffs and panoramic ocean views. This exclusive 1,850-acre master-planned community, founded by renowned resort developer Ernesto Coppel, is a paradise of elegance, serenity and service. Occupying a spectacular natural landscape is Quivira Golf Club, a Jack Nicklaus Signature golf course is slated to open October 1, 2014, and will be complemented by an exclusive oceanfront clubhouse. Quivira Los Cabos is the ultimate destination for residents and guests to live, love and celebrate life. For more information visit www.pueblobonito.com, find us on Facebook at pueblobonitoresort and follow us on Twitter @PuebloBonito.