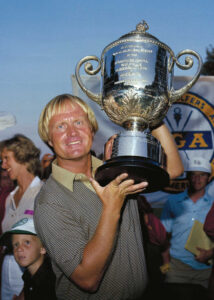 Major golf championships started before the Civil War: Willie Park won the first British Open, a 36-hole affair at Prestwick, in 1860. The U.S. Open debuted in 1895, and it was followed by the PGA Championship (1916) and the Masters (1934). To identify the greatest major championship players of all time, SI Golf Group devised a point system, and in the end, Jack Nicklaus—the record holder with 18 professional majors—emerged as the greatest major champion. The magazine started with the 1892 British because that was the first year the event was contested over 72 holes. While players from more than a century ago competed in only two majors a year, keep in mind that fields were considerably smaller, meaning it was easier to accumulate top 10s. So the playing field is somewhat leveled when comparing one era with another.