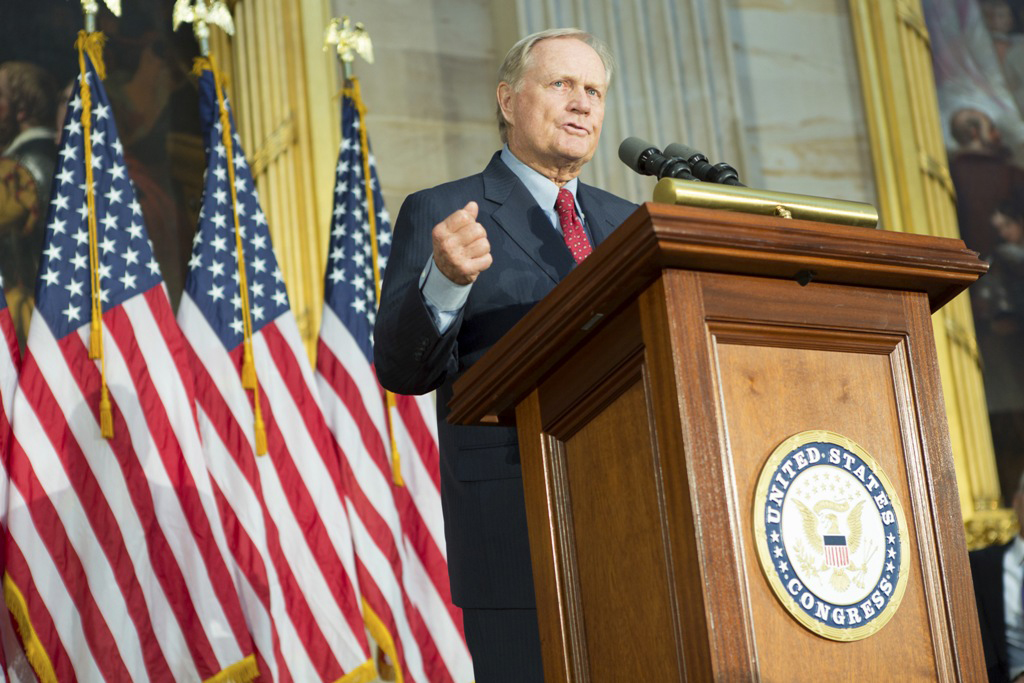 Medal recognizes Nicklaus’ service to the nation in promoting excellence, good sportsmanship, and philanthropy
Washington, D.C. — U.S. Senators Rob Portman (R-Ohio) and Sherrod Brown (D-Ohio) announced that their legislation to award the Congressional Gold Medal to the “Golden Bear,” Ohio native Jack Nicklaus, in recognition of his service to the nation in promoting excellence, good sportsmanship, and philanthropy passed the U.S. Senate. For over two centuries, Congress has awarded gold medals as an expression of public appreciation for the contributions of its most distinguished citizens. The legislation now heads to the President’s desk for signature.
“I am proud that this son of Ohio will be honored with a Congressional Gold Medal for his extraordinary life and achievements,” Portman said. “Jack Nicklaus is a legend, and without a doubt the greatest golfer of all time. Yet in addition to the Golden Bear’s career in golf, he is a dedicated philanthropist who has made a difference in communities across America. Together with his wife, Barbara, Jack has positively impacted the lives of thousands of children and their families through the Nicklaus Children’s Health Care Foundation, and other initiatives.”
“This is a fitting tribute for a man who has given so much to his community and country,” Brown said. “Known across the world for his records on the golf course, it’s his hometown Ohio roots that ground Jack Nicklaus’ lasting legacy.  Named by Sports Illustrated and ESPN as one of the greatest living athletes, the Golden Bear will now receive Congress’ greatest honor. I applaud Jack and his wife Barbara for all they have done and continue to do to improve the lives of others and I congratulate him on this honor.”
Since 1776, a diverse group of individuals has been honored with the Congressional Gold Medal, including George Washington, Sir Winston Churchill, Bob Hope, Robert Frost, Joe Louis, and Mother Teresa of Calcutta. Recent recipients include Neil A. Armstrong, the first human to walk on the Moon; Edwin E. “Buzz” Aldrin, Jr.; Michael Collins; John Herschel Glenn, Jr.; and Arnold Palmer.
“I had the fortunate pleasure in 2012 to attend and participate in Arnold’s Congressional Gold Medal ceremony, and I witnessed how special and meaningful it was to him,” Nicklaus said. “I am honored and humbled to have the opportunity to experience that, as well, and to be a part of a very special group of past recipients. The game of golf has been an incredible gift to my family and me. It not only gave me a livelihood, but it provided Barbara and me with a vehicle to give back and to impact other lives, especially those of children and families in need. To our leaders in both the House and the Senate who supported this extremely kind gesture, I offer my most sincere and heartfelt appreciation. God bless America.”
The Congressional Gold Medal and the Presidential Medal of Freedom are the highest awards bestowed on a United States civilian. Nicklaus was honored with the Presidential Medal of Freedom in 2005. He and Arnold Palmer are the only golfers in history to receive both honors.
Nicklaus was born in Columbus, Ohio, and went on to win a record 18 professional major championships as part of his 73 PGA Tour victories. He became one of the world’s most acclaimed golf course designers, with almost 300 golf courses designed worldwide. Nicklaus is also known as a devoted family man and, along with wife, Barbara, a passionate philanthropist with a focus on children’s healthcare. Nicklaus founded the Memorial Tournament, which is a PGA Tour golf tournament played on his design at Muirfield Village Golf Club in Dublin, Ohio. Since its inception in 1976, the Memorial Tournament has distributed over $20 million to many Central Ohio charities, including Nationwide Children’s Hospital and its Neonatal Intensive Care Unit.