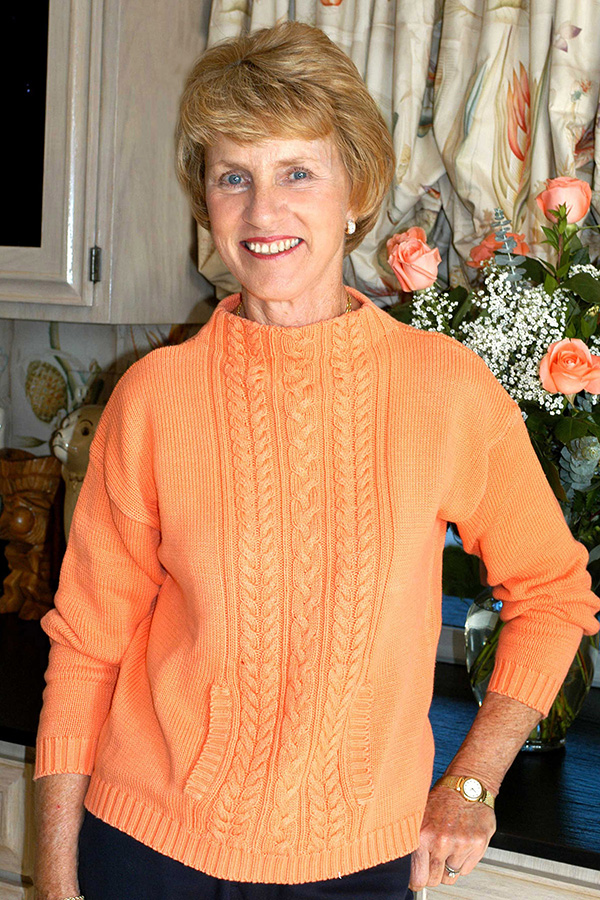 Award to be presented at ceremony during 2015 U.S. Open Championship

The United States Golf Association (USGA) has named Barbara Nicklaus as the recipient of the 2015 Bob Jones Award. Presented annually since 1955, the Bob Jones Award is the USGA’s highest honor. It recognizes an individual who demonstrates the spirit, personal character and respect for the game exhibited by Jones, winner of nine USGA championships.
Husband and record-holding 18-time major champion Jack Nicklaus received the award in 1975, making the Nicklauses the first married couple to independently receive the accolade in USGA history.
Often referred to as the “First Lady of Golf,” Mrs. Nicklaus has skillfully used her influence as Jack Nicklaus’ wife for nearly 55 years to generate attention for youth-related charitable causes and volunteerism.
“Barbara’s generosity of spirit and deep respect for the game have touched the lives of countless families throughout the world,” said USGA President Thomas J. O’Toole, Jr. “Her dedication to support players and spouses, and advocacy for multiple causes, are worthy of our highest honor. She has been the rock for one of the game’s greatest champions, while raising a family and devoting her heart and soul into what she believes in. We are proud to bestow this award upon her to recognize her lasting contribution to the game.”
Their desire to encourage youth participation in golf led to the formation of the Barbara and Jack Nicklaus Junior Golf Endowment Fund, which supports junior golf programs at the local, state and national level for children who otherwise might not be introduced to the game.
Mrs. Nicklaus currently serves as the chairman of the Nicklaus Children’s Health Care Foundation, whose mission is to provide charitable support for activities that advance and enhance the diagnosis, treatment and prevention of childhood diseases and disorders. The foundation, which also supports not-for-profit programs and projects aimed at pediatric health care and health-related services, has raised more than $32 million since its inception in 2004.
In 2010, the foundation became the lead charity of the Memorial Tournament presented by Nationwide, a PGA Tour event founded by the Nicklauses in 1976, with the intention of giving back to local charities included as one of the Tournament’s primary objectives. To date the event has generated more than $23.5 million in donations to Central Ohio charities, including more than $13 million to Nationwide Children’s Hospital in Columbus, Ohio.
Mrs. Nicklaus’ involvement as co-chairperson for the charity that organizes The Honda Classic on the PGA Tour has also benefited the foundation. Funds generated through the event in Palm Beach Gardens, Florida, have been instrumental in opening the Nicklaus Outpatient Center in partnership with Miami Children’s Hospital, which is designed to meet the healthcare needs of children and adolescents from birth through age 21.
“Wow! What a truly humbling honor!” Barbara said when informed of the award. “The USGA has been a part of our lives since Jack and I were teenagers, and we have always respected and appreciated their contributions and impact on the great game of golf. To receive this honor from them, one that bears the name of a man who had such a deep impact on our family, is one of the most meaningful recognitions I have been blessed to receive.
“Golf has not only given us an incredible life, it has provided us a vehicle and a means to make a difference in the lives of young boys and girls, and the families who love them. I don’t think our life’s work could ever compare to or repay what the game has given to us. I thank the USGA, the caretakers of this wonderful game, for this extremely kind gesture and honor.”
Mrs. Nicklaus joins a list of winners that includes champions such as her husband, Jack (1975), Francis Ouimet (1955), Babe Didrikson Zaharias (1957), Arnold Palmer (1971), Ben Hogan (1976), Annika Sorenstam (2012) and Payne Stewart (2014), as well as those who have contributed to the fabric of the game in other meaningful ways, including Richard S. Tufts (1967), Joseph C. Dey Jr. (1977), Bing Crosby and Bob Hope (1978), P.J. Boatwright Jr. (1993) and President George H.W. Bush (2008).
The devoted mother of Jack II, Steve, Nan, Gary and Michael, and grandmother of 22, Mrs. Nicklaus continues to work for the causes she holds dear.
The Bob Jones Award will be presented at a ceremony during the week of the 115th U.S. Open Championship, which takes place June 15–21, 2015, at Chambers Bay in University Place, Washington.