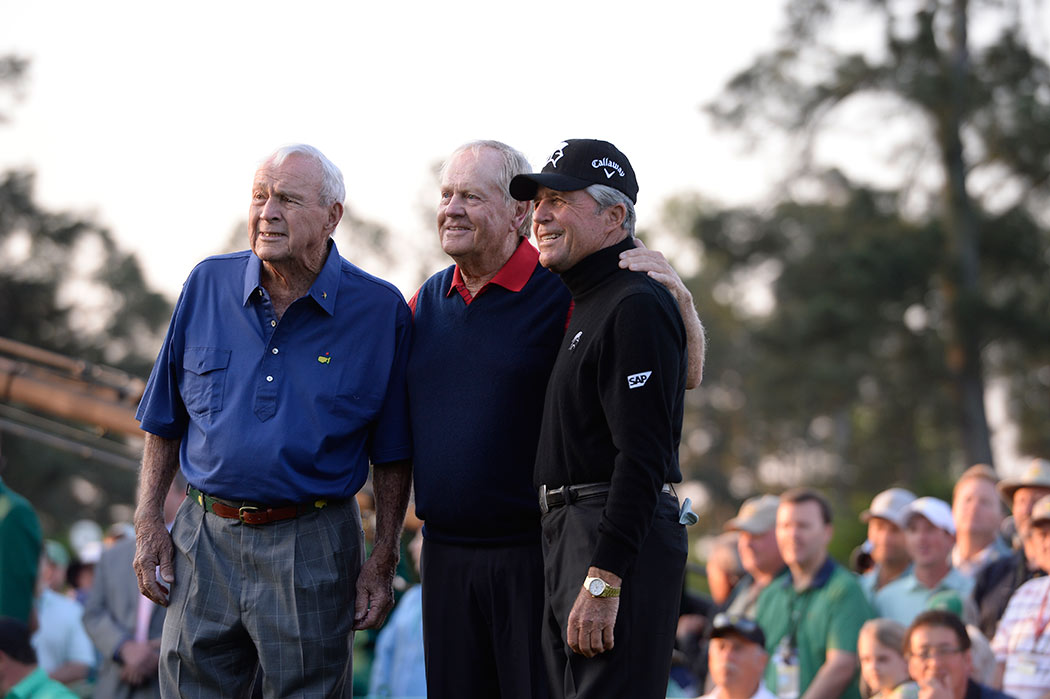 By Steve DiMeglio, USA TODAY Sports
Augusta, Georgia — Roars echoed through the majestic pine trees of Augusta National for decades when Arnold Palmer, Jack Nicklaus and Gary Player were in search of victory in the Masters, with the Big Three combining for 147 starts and 13 green jackets, including seven consecutive wins starting in 1960.
On Thursday, laughter echoed through the media center after the trio hit the ceremonial first tee shots of the 79th Masters. Right off the bat the three had media members at the first chuckle in their annual address.
When asked about the 1965 Masters when the three were tied for the lead after 36 holes, they looked at each other waiting for the other to say something.
The Golden Bear delivered the first shot.
“I remember the third round,” he said. He should. Nicklaus shot 64 to take command and went on to win the second of his record six green jackets.
“I remember it. The wrong man won,” Player said.
“I don’t remember anything,” Palmer added.
And the laughter was on.
Palmer, still recovering after dislocating his shoulder in December, hit the first tee shot as Rickie Fowler, Keegan Bradley and defending champion Bubba Watson were on hand out of respect at 7:40 a.m. ET. It mattered little to anyone — except for Palmer — that it sailed over the large gallery and landed near the ninth green on the left. Player split the fairway with his drive, with Nicklaus coming up 10 yards short of Player with his.
“I said, ‘Don’t fan it,’“ Palmer said when asked what was going through his head before taking his driver back.
At 85, Palmer is the senior member of the Big Three, with Player a spritely 79 and Nicklaus 75. Nicklaus was asked if he wondered what he’ll be doing when he reaches the ages of his two friends.
“I’m trying to figure out what I’m doing at 75. Nine holes on the Par 3 yesterday darn near killed me,” he said.
“He’s not going to get to 85,” Player said.
“That would be a nice goal,” Nicklaus said. “Gary, he works hard on his body and, rightfully so, he gets good results. I work very hard, but I don’t get much results out of it. If you look at my back, it looks like a pretzel, if you saw the MRI of it, but that’s the way it goes. We do the best we can with what we’ve got. We all enjoy getting older; nobody enjoys the alternative.”
Nicklaus made a hole-in-one in the Par 3 Contest, his first Augusta ace.
“Arnold and I have been tied for I don’t know how many years on 20,” Nicklaus said. “Gary was tied with us as 20, but he goes and plays a lot of par-3 courses.”
“Well, you’re counting yours, I notice,” Player countered.
“But he’s got a course at home that he’s got a lot of 40- and 50-yard holes,” Nicklaus said.
Then talk turned to drivers.
“I just use whatever they give me,” Nicklaus said. “I’ve been using the same driver for 10, 12 years. … If you would have seen Arnold carve away on drivers when we first started playing on the Tour, I mean, he would get a driver and first thing you would see him do is get out a file and he would start carving away, and each tee he would be changing the grip. He would get in and change the shaft, bend the shaft around, and it was all hit-and-miss.
“It was all guesswork by all of us in those days.”
It helped to have strong hands.
“Arnold definitely had the strongest hands I’ve ever seen on a golfer in my life,” Player said. “ … I’ve got to tell you a story. He comes to South Africa, and we go down the gold mine. We watched them mining at 8,000 feet in those days. … They bring out one of the gold bars that we watched them pouring. And the man puts it on the table with two hands, and he says, about 20 of us there, he says, ‘Anybody that can pick this up can have it.’
“Arnie says, ‘Ask him if I can try.’ I said, ‘I’ve got a friend here from America, can he try?’ He goes, ‘Sure.’ And Arnold goes and picks it up [indicating with little effort], and this guy’s eyes went this big [eyes large in shock]. He says, ‘I only work here.’ Arnold says, ‘You did work here.’ Part of that is he’s got deep pockets and short arms, and never bought me a lunch.”
Palmer didn’t miss a beat.
“You wouldn’t give the ducks a drink if you owned Lake Okeechobee,” he said.
As the laughter died down, Palmer perked up.
“OK. I’m ready to go home,” as the media center erupted with laughter.
But Player had the final word.
“My friendship with them has been fantastic,” Player began. “We always wanted to beat the living hell out of each other. We made that very clear. But when we did lose, we said, ‘Well done and congratulations, maybe I’ll get you next week.’
“They have been to my farm; we have been down gold mines; I’ve slept at Arnold’s house; slept at Jack’s house, food was lousy.”
“I’ll tell Barbara that,” Nicklaus said referring to his wife.
And Player ended with one more story. He was staying at Nicklaus’ house during a PGA Tour tournament as the two were at the top of the leaderboard heading into the final round.
“Now Barbara is making the breakfast, and I’m thinking, hell, I’m a bit worried about this, we’re tied. So when she put the eggs on the table and she went to the kitchen, I swapped them around,” Player said. “But it didn’t help because he beat me anyway.
“You can have love for a woman and you can have love for a friend, and I think the greatest word that exists in any book of note is love and I think this is what we’ve had for each other.”