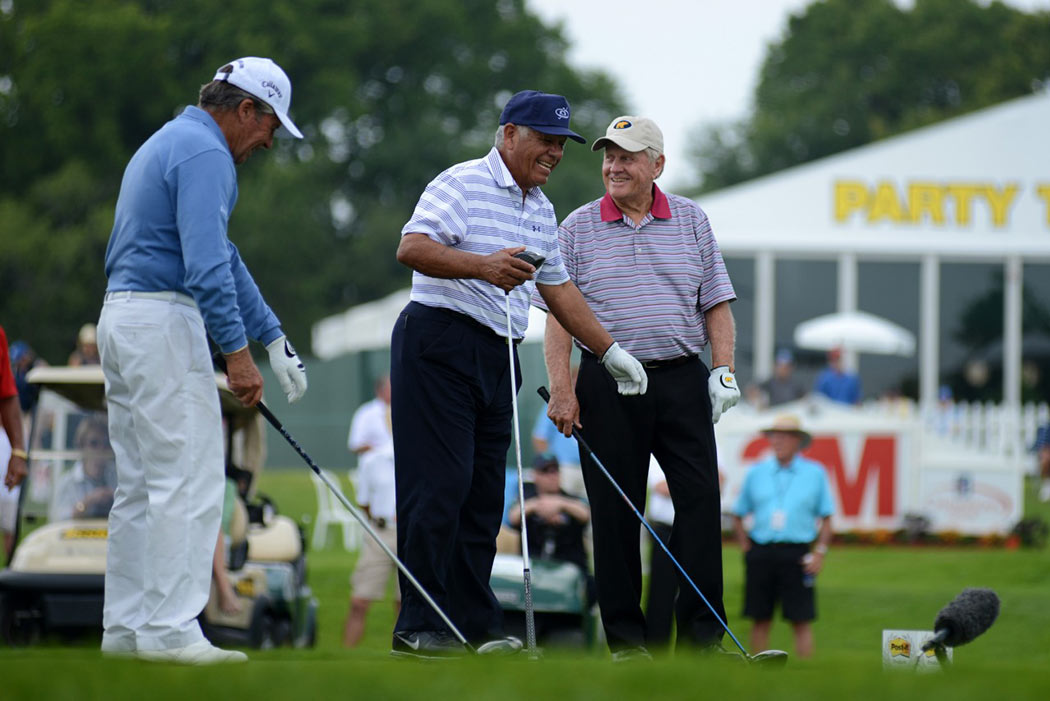 The Golden Bear teams with Player and Trevino; Golf Channel will provide coverage
A special and popular Saturday tradition returns to the Insperity Invitational presented by UnitedHealthcare, when the 3M Oil & Gas Greats of Golf gather for the fourth consecutive year.
Fans will have the rare opportunity to see the team of Jack Nicklaus, Gary Player and Lee Trevino tee it up among other legends in an exceptional exhibition Saturday afternoon of tournament week at The Woodlands Country Club Tournament Course outside Houston.
The exhibition, which features a trio of three-man teams playing a scramble format over 18 holes, will be integrated into second-round play of the Insperity Invitational—with the nine greats teeing off after the last tee time of the official field. Coverage on the Golf Channel will be from 7:30 p.m. to 9:30 p.m. ET.
For the past three years, thousands of fans have lined the fairways to watch one of the year’s more entertaining events in golf, as a collection of the game’s greatest legends share laughter and friendship during this popular Champions Tour event. Once again Nicklaus, Player and Trevino will be joined by Raymond Floyd, Don January, David Graham, Tony Jacklin, and Dave Stockton. The field will include a first-time appearance by Tom Weiskopf, and Arnold Palmer will be on hand to serve as an honorary chairman and observer for the event.
In the inaugural year of the scramble showdown, Palmer, Nicklaus and Player were the winners. Last year, Nicklaus, Trevino and Player teamed to shoot 10-under-par 62 to share the title with Stockton, Miller and Jacklin, who were the winning threesome in 2013.
When Insperity Invitational Executive Director Byran Naugle first formed the event in 2012, it was thought to be potentially the last gathering of the “greats,” and what Naugle called a one-shot-deal.
“Basically, I just went to them all and said, ‘Hey, I’d like to get the band together one more time,’” Naugle said.
He approached Nicklaus in his Palm Beach Gardens office two months before the 2012 event to try to find an open date that matched Nicklaus, Palmer, Player and Trevino’s calendars, and that also corresponded with an event on the Champions Tour that would be a good fit. Now, the event draws the greats together year after year.
“Saturday has become the highlight of the week for many of our fans, who are also able to see current stars on the Champions Tour compete in the same day,” Naugle said. “It is also one of the highlights of the year for the players involved because they get to spend a couple of days together in a very relaxed atmosphere.”
“I think we all had a great time playing together,” Nicklaus said, reflecting on The Big Three’s victory in the 2012 inaugural event. “We had fun. We won—which is probably secondary to having fun at our age—and it went well. We were treated very nicely and everybody seemed to enjoy having us there.”
And although he doesn’t compete often, Nicklaus and his teammate Gary Player made a charge during the final round of last weekend’s Bass Pro Shops Legends of Golf at Big Cedar Lodge. The longtime friends finished runner-up in the Legends Division to the team of Larry Nelson and Bruce Fleisher.
Saturday’s Greats of Golf group includes six World Golf Hall of Fame members, has more than 300 combined PGA TOUR victories, over 50 major championship titles, and more than 150 Champions Tour wins.
The Insperity Invitational offers free grounds-only admission tickets courtesy of Insperity, MD Anderson Cancer Center, Woodforest National Bank and HP. The grounds ticket also includes free parking and shuttle service. For updated information on all aspects of the Insperity Invitational, fans are encouraged to visit www.InsperityInvitational.com.