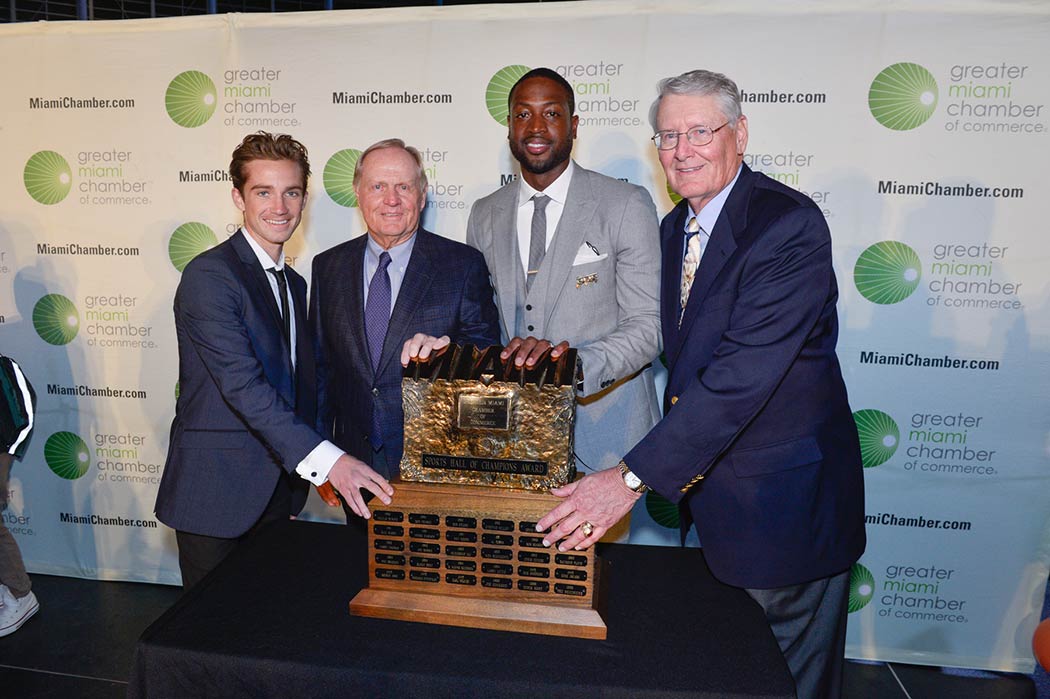 Business and community leaders honored several of South Florida’s outstanding professional athletes, including Jack Nicklaus, at the Greater Miami Chamber of Commerce’s Sports Hall of Champions induction ceremony Wednesday, September 16, at Marlins Park in Miami. The annual event honors individuals who, through their achievements in and contribution to sports, have brought recognition to South Florida.
Nicklaus, the winner of a record 18 professional major championships and a resident of South Florida since the late 1960s, was inducted, along with Dwyane Wade, a three-time NBA Champion with the Miami Heat, and former World No. 1 tennis player Chris Evert, who won 18 Grand Slam singles titles. William “Woody” Woodward, who was named the 2015 Lifetime Contribution to Sports inductee, was a Florida State University baseball player, former Major League Baseball player, and general manager for the Yankees, Phillies and Mariners.
During the evening, Wade learned that Nicklaus is not only a self-proclaimed “sports nut” and a Heat fan, but that wife, Barbara, might be a bigger one. Nicklaus told a story of when he once called home during a trip to Brazil, and his wife answered, and asked him to hold because 6 seconds were left in a Heat game.
Nicklaus is or has been a season ticket-holder for Miami’s four pro teams—the Dolphins, the Florida Panthers, the Miami Marlins and the Heat. The Golden Bear joked that shortly after the Heat drafted Wade in 2003, he had to give up his season tickets because of the success the 11-time All-Star brought to the city.
“A Miami Heat ticket is simply too expensive for me anymore,” Nicklaus said, drawing laughs.
Also in attendance were tennis great Butch Buchholz, Hall of Famer Tony Perez from the Miami Marlins, and tennis legend Martina Navratilova. Evert’s son, Alex Mill, accepted the award on his mother’s behalf. Former news anchor Tony Segreto, a “Lifetime Contribution to Sports” past honoree (2003), was master of ceremonies.
South Florida is also home to Nicklaus’ global businesses—which are headquartered in North Palm Beach—and his family’s foundation, the Nicklaus Children’s Health Care Foundation. In March of 2015, Miami Children’s Hospital and its network of outpatient centers were rebranded to Nicklaus Children’s Hospital in recognition of a $60 million pledge from the Foundation.
Inductees were selected based on participating in sports in South Florida and achieving recognition in the community; maintaining distinction in sports as a player, coach or executive; and making contributions to the betterment of sports in South Florida.
“Miami is truly emerging as a ‘sports town’ in every aspect of that phrase. Not only do we have an international brand for the major professional sports, we are also recognized worldwide as a venue for amateur events,” said Bob Fitzsimmons, chair of the Greater Miami Chamber’s Sports Hall of Champions and an attorney with Rumberger Kirk & Caldwell. “The wonderful legacy of the Greater Miami Chamber of Commerce’s annual Sports Hall of Champions induction is further magnified by the stature of this year’s inductees.”