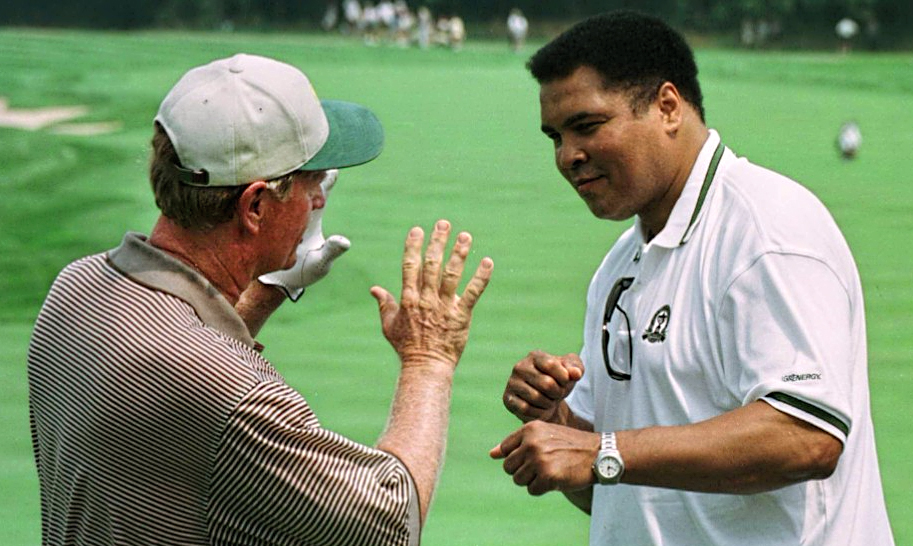 Time Inc.’s Sports Illustrated will honor Jack Nicklaus as the first recipient of the Muhammad Ali Legacy Award at a special event in New York City on December 15. The award was created in 2008 to honor athletes and sports figures that have embodied the ideals of sportsmanship, leadership and philanthropy as vehicles for changing the world over their lifetime. Earlier this year the award was renamed the Sports Illustrated Muhammad Ali Legacy Award in tribute to the iconic boxer and humanitarian.
“It gives me great pleasure to know the first Sports Illustrated Muhammad Ali Legacy Award will be given to one of sports’ biggest living legends, Jack Nicklaus,” said Muhammad Ali. “Jack’s passion for excellence on the golf course is only surpassed by his love and passion for children and their well being. For decades, he has used his celebrity to bring awareness and support for children’s health. I can not think of a more deserving person for this special inaugural award than the Golden Bear, himself.”
Nicklaus, who this year became just the seventh athlete in history to be awarded the Congressional Gold Medal, is being honored for a lifetime of success and influence as one of the greatest golfers of all time. He is a record-setting champion of the sport who has also made philanthropy a central part of his legacy. He joins Eunice Kennedy Shriver, founder and driving force behind the Special Olympics, and Earvin Magic Johnson, renowned entrepreneur, philanthropist and social and political activist, as Legacy Award honorees.
“There are very few in the sporting world who are more synonymous with the word ‘legacy’ than Muhammad Ali, so to have his name attached to the prestigious Legacy Award is so fitting,” said Jack Nicklaus. “He is not only known universally as the ‘Champ,’ but he has been a wonderful global ambassador for sports and our country. This is a marvelous way to honor his contributions past and present, and to ensure that generations going forward will have the opportunity to learn, respect and admire all Muhammad Ali has done for the sporting world. That is why to be the first recipient of the Ali Legacy Award is both humbling and an honor.”
During the forthcoming award ceremony, SI will also recognize the 2015 Sportsman of the Year and SI Kids’ SportsKid of the Year along with other transcendent individuals from the 2015 year in sports.
Jack Nicklaus is a true champion in the world of golf and is one of the most iconic sports figures of our time. He has appeared on the cover of Sports Illustrated 22 times — more than any golfer — and was named SI’s Sportsman of the Year in 1978. In 1999 he was selected as SI’s Individual Male Athlete of the 20th Century.
“Jack is the ultimate ambassador for golf and the sporting world,” said Sports Illustrated Group Editor Paul Fichtenbaum. “From his play, which set the standard in golf for decades and is still held up as the benchmark today, to his successful business pursuits and tireless efforts to support a range of charitable causes, Jack is one of a kind. Having spent a lifetime using his celebrity and influence for philanthropic endeavors and goodwill missions while serving as an inspiration for so many people around the world, Jack represents the ideals of the Legacy Award and stands up perfectly next to the award’s namesake, Muhammad Ali.”
Nicklaus’s competitive golf career spanned five decades and includes 120 professional tournament victories worldwide and a record 18 professional major-championship titles (six Masters, five PGA Championships, four U.S. Opens, three British Opens), as well as being a five-time winner of the PGA Player of the Year Award. He has won recognition and praise for his dedication to excellence and his stewardship of the game, from personally designing close to 300 courses worldwide to his leadership in restoring golf to the 2016 Olympic Games.
Nicklaus, known as the “Golden Bear,” has used his platform over the decades to support myriad charities, most of which have focused on pediatric health care. He and his wife, Barbara, created the Nicklaus Children’s Health Care Foundation, which provides pediatric services in various communities nationwide. It has raised tens of millions of dollars over the last decade, and reached a significant milestone this year when Miami Children’s Health System renamed its flagship hospital, as well as eight outpatient centers, Nicklaus Children’s Hospital. He also supports a number of other pediatric care organizations, including Children’s Miracle Network Hospitals and St. Jude Children’s Research Hospital. As co-chairman of the Nicklaus Companies, he has integrated give-back components benefiting these and other children’s charities in a number of products—from golf balls to wine to ice cream.
In addition to being recognized by almost every major publication in the world as the greatest golfer of the last century, other accolades and awards for Nicklaus over his lifetime include being only the 17th person in history to receive the Presidential Medal of Freedom and the Congressional Gold Medal (the highest honors given to any U.S. civilian); the PGA Tour Lifetime Achievement Award; the Woodrow Wilson Award for Corporate Citizenship; and being inducted, along with his wife, into the Ambassador David M. Walter International Pediatric Hall of Fame.
Nicklaus, Shriver and Johnson are the only people to be selected by SI to receive the Legacy Award. Shriver was the inaugural honoree in 2008, with her son Bobby accepting the award in her honor. In 2014, Johnson accepted the honor and was praised by President Bill Clinton and NBA commissioner Adam Silver. On October 1, the award was dedicated to Muhammad Ali during a ceremony that took place at the Muhammad Ali Center in Louisville, Ky., which was attended by Ali, his wife, Lonnie, and other notable figures in the community and sports world, including George Foreman, Larry Holmes, Shaquille O’Neal and Louisville mayor Greg Fischer.