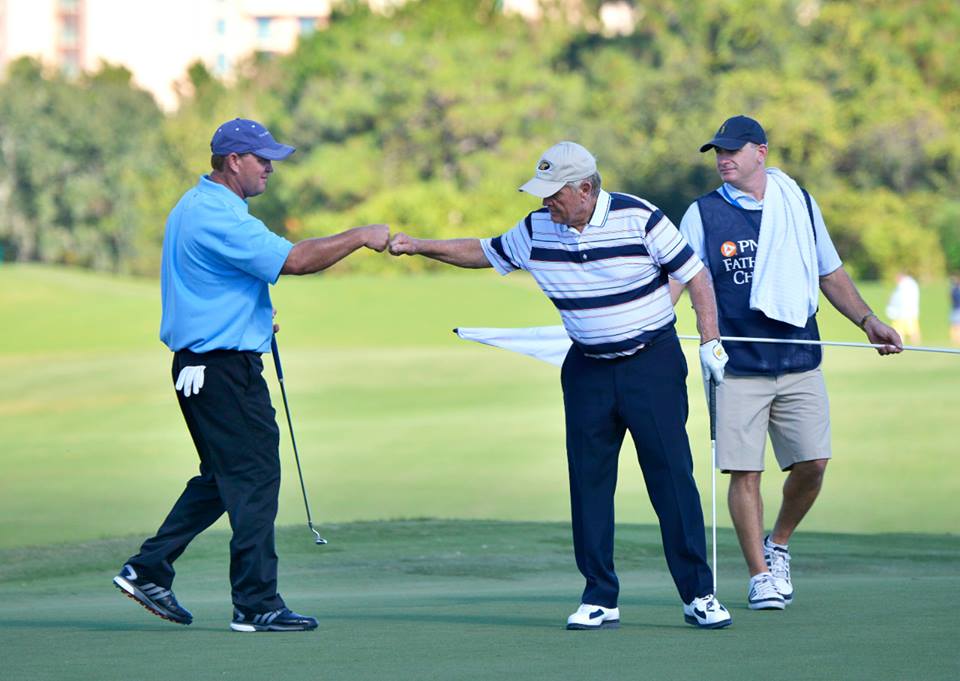 If you break out the bios, Jack and Gary Nicklaus combined to be the oldest team in the field at the 2015 PNC Father/Son Challenge. But for the Golden Bear, competition never gets old.
Jack and Gary Nicklaus, the most veteran tandem at a combined 121 years, played for two days like they were trying to shoot their age. But after making several early runs on both Saturday and Sunday, Team Nicklaus came up five shots shy of the lead and an eventual four-team playoff. Their final-round 65 and two-day total of 15 under at The Ritz-Carlton Golf Club, Orlando, left them tied for 14th.
A foursome of teams finished at 20 under: Lanny and Tucker Wadkins; Larry and Drew Nelson; Davis and Dru Love; and Fred and Taylor Funk. Team Wadkins took the victory when 23-year-old Tucker sank a 40-foot eagle putt on the first hole of sudden death, No. 18.
“I don’t play much golf any more, but when I do, I certainly want to be competitive, and I certainly think we were,” Jack said. “For all that I love about the game of golf, it is no secret that golf has always been my vehicle to competition. We played well at times, hit some good shots, made a few runs, but missed a few shots and putts when we needed them.
“Still, what is most important is that for two days, I got to play golf with my son and, as always we had a blast.”
Jack, 75, was playing in his 14th PNC Father/Son Challenge, while Gary, 46, was his partner for the seventh time. The duo won the Father/Son Challenge in 1999 at TwinEagles in Naples, Fla., on the Talon Course co-designed by Jack and son Jack II, president of Nicklaus Design.
Team Nicklaus was part of a Hall-of-Fame field of greats who have amassed 350 PGA TOUR victories and 64 major championships. Of course, a record 18 of those majors belonged to the Golden Bear.
The field also included nine former Ryder Cup captains, as well as current U.S. Ryder Cup Captain Davis Love III. The field, as well as representatives from sponsor PNC Bank and pro-am invitees, were treated to a Q&A on the eve of the tournament between Love and NBC’s Jimmy Roberts. On the same night, Jack and Gary walked away with a trophy for being the “overall net champions” in the PNC Father/Son Challenge Pro-Am on Friday.
The following day, Jack and Gary opened the first round of competition with birdie putts by Jack on the first two holes. They eventually finished Saturday’s first round at 8-under 64. They opened Sunday’s final round with a surge of birdies and actually tied for the lead, before a bogey on No. 9 and a string of five straight pars from Holes 13-17 left them five shots off the pace.
To qualify for the PNC Father/Son Challenge, participants must have won either a major championship or THE PLAYERS during their career. The professional’s partner must not currently hold a Tour card, and while the majority of partners in the history of the event have been the sons of the golf legends, the family-themed tournament has seen daughters and grandsons participate over the years. In one poignant exception in 2008, a close family friend also participated when Payne Stewart’s son, Aaron, teamed up with Paul Azinger, Stewart’s long-time friend.
The 20-team field competes in a scramble format over 36 holes for the $1,085,000 prize purse and the Willie Park trophy, named after Willie Park, and his son Willie Park Jr., who combined to win the British Open five times.