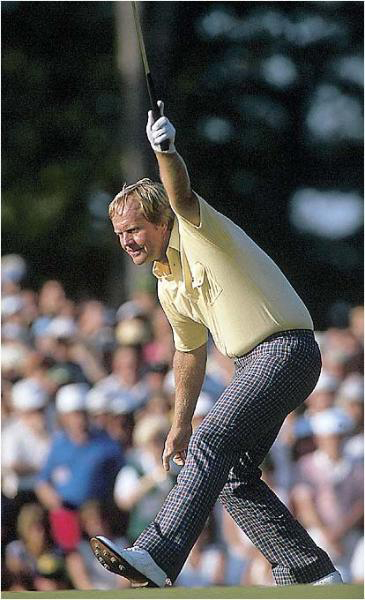 Golf Channel seeking “Where Was I” submissions on that memorable Sunday of the 1986 Masters at golfchannel.com/jack
Not often does a golf tournament garner a nickname that is simply the last two digits of the year in which it was played. However, when people talk about Jack Nicklaus capturing his record 18th and final major championship on Sunday, April 13, 1986—capping off one of the most legendary performances in sport and arguably the most exciting final round in Masters history—all they have to say is “’86.”
Golf Channel will celebrate the 30-year anniversary of Nicklaus’ historic victory at the 1986 Masters with ’86, a one-hour special premiering in April that tells the full-circle story of the week and Nicklaus’ memorable come-from-behind victory to secure his record 18th major championship victory and record sixth Green Jacket. Highlighted by a final-round 65 and a 6-under-par 30 on the final nine holes, Nicklaus became the oldest winner of the Masters at age 46 and the second-oldest winner of any major championship in history.
The memorable victory came 23 years after Nicklaus donned his first Green Jacket, and put an exclamation point on a 25-year period in which he won his 18 majors. The Golden Bear’s final round in ’86 was highlighted by an eagle-birdie-birdie streak at Nos. 15, 16 and 17 for the second-nine 30. As we kicked off the new millennium, GOLF Magazine called the Golden Bear’s win the “Best Tournament of the 20th Century.” GolfWorld called it the “Greatest Masters Tournament” in history, and the final-round 65 the “Greatest Final Round in Major Championship” history. Golf Digest ranked ’86 as one of the “10 Defining Moments in Golf History.”
In his Masters career from 1959 to 2005, Nicklaus made 45 starts, winning in 1963, 1965, 1966, 1972, 1975, and ’86. He also holds records for the most top-5, top-10, and top-25 finishes at Augusta National. Even 30 years removed from his final Masters’ victory, and more than 10 years after his final round at Augusta National, Nicklaus owns or is tied for no fewer than 35 Masters’ records.
As a part of the special, Golf Channel is asking fans to share their own personal stories in regards to the 1986 Masters, including “Where was I” anecdotes of that historic Sunday 30 years ago, at golfchannel.com/jack. Select story submissions will be featured in ’86.
“Nicklaus’ remarkable comeback win is one of those rare moments in sports where we remember exactly what we were doing and where we were on that Sunday 30 years ago,” said Keith Allo, Golf Channel vice president of programming development and original productions. “To help celebrate this anniversary, we are eager to hear recollections from fans who also were watching history in the making.”
’86 is being produced by Golf Channel Films, which has developed critically acclaimed long-form documentaries and specials including the Emmy-nominated Payne; the three-part documentary Arnie and a fourth installment in 2015, Arnie & Me; and Ben Crenshaw: A Walk Through Augusta.
’86 will include interviews with Nicklaus and his family, friends, fellow professionals, caddies, members of the media, volunteers and patrons who were on hand. In addition, this Golf Channel Films project will paint a picture of the world’s political, sports and pop culture climates at the time, giving viewers insight into the significance and importance of Nicklaus’ victory not only in the world of golf, but also in the wider setting of historical moments that occurred in 1986.