It started with a drive down Magnolia Lane. It ended with a trip down memory lane.
The Masters Tournament is always a special time of the year for Jack Nicklaus—with that whole six Green Jackets thing and all—but the 80th Masters just had something special about it. And there was no time wasted to sensing it, beginning with the Golden Bear’s drive down iconic Magnolia Lane to enter Augusta National Golf Club. 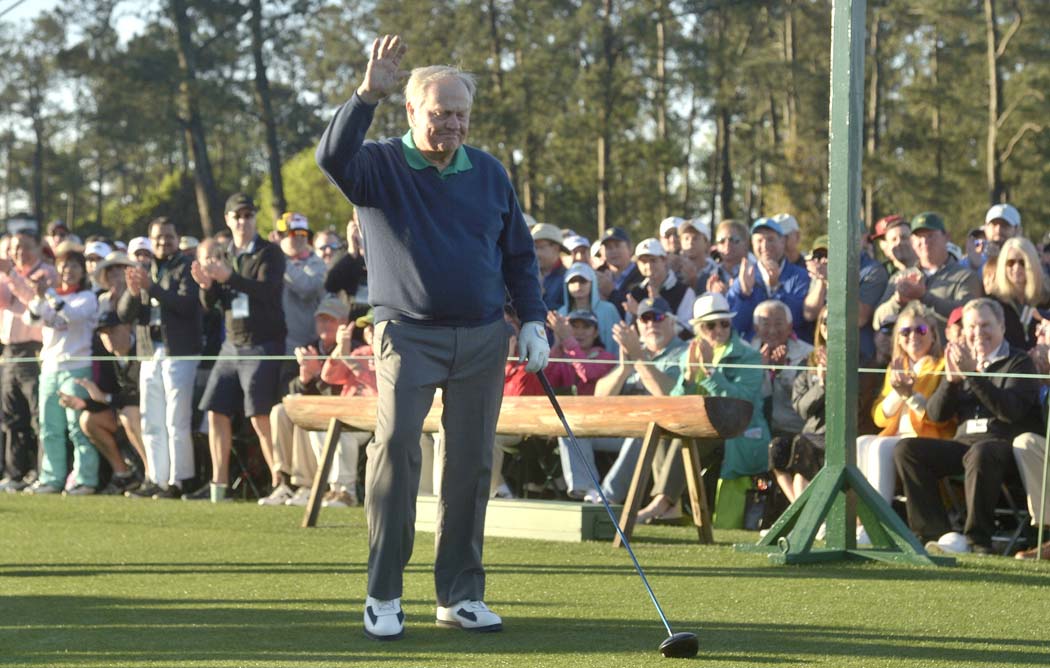 “Had I realized he was filming me, I might not have been so nice,” Nicklaus said with a wink and tongue firmly planted in cheek.
After an hour-long press conference, it was off to the Champions Dinner where Spieth, the 2015 Masters winner, did in fact select an authentic Texas barbeque menu—a nod to his native state. Nicklaus sat between four-time Masters champions Tiger Woods and Arnold Palmer.
“Last night’s dinner was very good. The barbeque was great and the camaraderie was great,” Nicklaus said. “I sat next to Arnold [Palmer] on one side and Tiger [Woods] on the other side. We had some great conversations that were so diverse, you wouldn’t believe. It was great—and that’s what the Champions Dinner is all about.”
The moment didn’t escape Woods, who tweeted later Tuesday night: “Pretty cool that at dinner tonight 3 of us sitting next to each other have won a combined 14 green jackets.”
While Nicklaus was about to wrap up the Champions Dinner, his fans and many in the golf world had the chance to enjoy the premiere of Golf Channel’s highly anticipated original documentary, ’86. The hour-long retrospective celebrated the 30th anniversary of the Golden Bear’s iconic 1986 Masters win with behind-the-scenes anecdotes—such as Jack’s decision to wear yellow on Sunday, because it was the favorite and lucky color of a friend and child, Craig Smith, who had passed away 15 years earlier from cancer—and compelling stories gathered from over 75 interviews conducted by Producer Israel “Izzy” DeHerrera and his award-winning team.
As one of many fans who wrote Jack after the documentary aired said, “I am watching ’86 for the 5th time since I discovered it a week ago on Golf Channel. Every time the part about Craig Claxton Smith (may he be Resting Happily In Peace) comes on, I lose my composure. Listening to Jack Nicklaus describe his experience at the ’86 Masters—I’ve been telling everyone I know about this documentary—I cannot say enough about it.
“Everyone who contributes to the recounting of what happened—everyone—there’s such animation in their voices…. 30 years on. I didn’t know the entire story before I happened upon ’86. I get chills thinking about how monumental it was that ‘The Golden Bear’ won The Masters in 1986 with a back nine on Sunday that is clearly and literally a stretch of golf for The Ages.
“I’m not one to weigh in about too much, but I just had to say thank you for being such an inspiration, and for being a positive inspiration on so many levels to so many people worldwide.
“Amazing.
‘Be right.’
‘It is.’”
Wednesday at the Masters, the Golden Bear balanced a gauntlet of live interviews—Mike and Mike on ESPN Radio, The Dan Patrick Show on NBC Sports, Steve Sands on Golf Channel, and Hannah Storm on ESPN—with visits to see friends and partners, such as Rolex. At the Rolex cabin, you could find in one hour Annika Sorenstam, Tom Watson, world No. 1 Lydia Ko, Adam Scott, and David Leadbetter.
Then, Nicklaus teed off ESPN’s coverage of the popular Masters Par 3 Contest with playing partners and good friends Tom Watson and Gary Player. Nicklaus had his first-ever caddie duet of grandchildren Will Nicklaus and Kelly O’Leary on the bag. And although he didn’t follow up last year’s hole-in-one in the Par 3 Contest with another this year, the Golden Bear was there to support three-time Masters winner Gary Player with his 31st hole-in-one.
Thursday morning, Nicklaus was back with Palmer and Player on the first tee to get the 80th Masters Tournament underway as an Honorary Starter. Nicklaus and Player competed in a friendly long drive competition, while Palmer greeted the adoring crowd and cheered on his pals. Although Nicklaus has been an honorary starter in the event since 2010, participating in the tradition this year moved the Golden Bear to tears.
At the tournament’s conclusion—and after various CBS Specials aired Saturday and Sunday to pay tribute to the Golden Bear—Nicklaus offered words of encouragement and understanding to Spieth, who led the Masters through 65 holes before a quadruple-bogey 7 on the infamous par-3 12th hole derailed him and led to a second-place finish.
“I think the whole golfing world feels for Jordan Spieth,” Nicklaus said. “He had a chance to do something truly special and something very few have done before—and be the youngest to accomplish that—and he just didn’t pull through. My heart goes out to him for what happened, but I know that Jordan is a young man who will certainly learn from this experience and there will be some good that comes out of this for him. He’s a wonderful talent and a wonderful young man.”
The Golden Bear wasted no time to offer heartfelt congratulations to 2016 Masters winner Danny Willett.
“I’ve watched Danny Willett play on television a few times and when I’ve seen him swing the golf club, I have thought, ‘Well, this young man looks like he’s a pretty darn good player.’ ” Nicklaus said. “He had moved himself up to 12th in the world, so he’s obviously done something right and was playing very good golf coming into Augusta. What impressed me so much is that when he realized he was in a position to win, he finished it—and that’s the mark of a champion: To finish a good round; give yourself an opportunity to win; and when the other fellow doesn’t finish, you’ve got to be there. Danny Willett was and kudos to him. What an amazing couple of weeks for him—from becoming a new father to becoming the latest Masters winner. My congratulations go to Danny for what he did.”