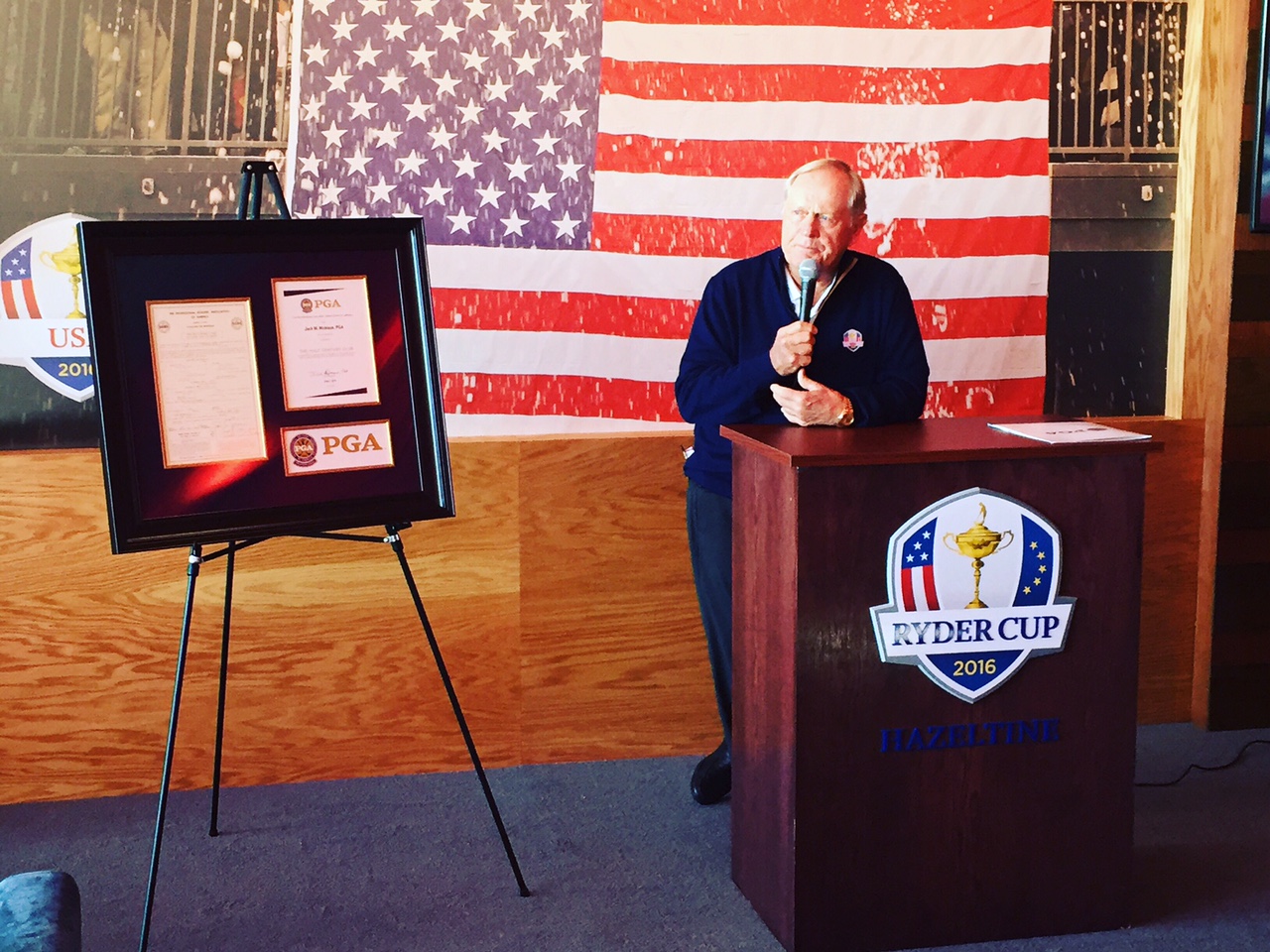 Jack Nicklaus may have celebrated 50 years as a PGA of America Member this year, but his first encounter with the Association took place in 1950, when PGA Professional Jack Grout called him out of a group of youngsters at Scioto Country Club in Columbus, Ohio.
Nicklaus said he can still hear Grout’s rapid-fire instructions.
“Hey, Jackie boy, show them how to hit a golf ball into the air,” said Grout.
“Jackie boy, show them how to hit a hook.”
Nicklaus paused, “I’m glad that he didn’t ask me how to hit a slice.”
Jack Nicklaus would go on to become golf’s most successful performer, adding five PGA Championships to a record 18 professional major titles. During his career, he maintained a bond with the PGA, which officially began with his election to membership, June 1, 1966.
On Saturday, Nicklaus was presented with a framed copy of his PGA Membership application by PGA President Derek Sprague at the PGA Members Pavilion hosted by the Minnesota PGA Section.
“On behalf of PGA Professionals across the country, thank you for the support you have given the PGA of America and the game of golf,” said Sprague. “You’ve played the game at the highest level, and over the course of these 50 years you also have been a great mentor outside the gallery ropes to countless PGA Professionals.”
Said Nicklaus, “The PGA has always been very supportive of everything that I’ve done, for which I am great appreciative. I always enjoy going around the country and walk into a club or course and know that I’m welcome.
“The game of golf has come a long way and you look out here, isn’t that something? I remember when the Ryder Cup didn’t make 10 cents.”
Nicklaus competed in his first Ryder Cup in 1967, and would go on to be instrumental in the event’s current lofty perch among sport events worldwide by campaigning in 1977 for the inclusion of Continental Europe.
“It’s really nice of you to recognize me today, and didn’t realize it’s been 50 years,” said Nicklaus. “The game has come a long way and I’m very pleased to be part of it and part of its success story. I hope to continue to be a part of the success story for a long time.”