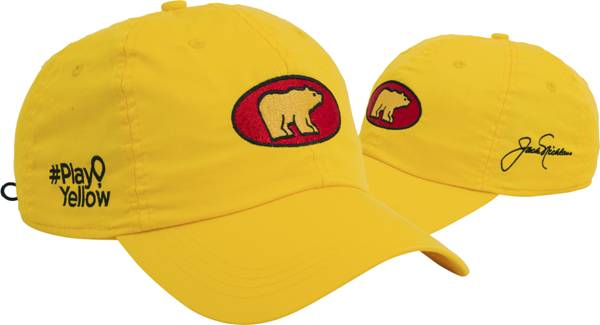 Jack Nicklaus to Debut Limited Edition Hat at The Masters

New Bedford, MA — AHEAD, the golf industry’s leader in headwear, and longtime partner the Nicklaus Companies today announced a limited edition Play Yellow hat to support Jack and Barbara Nicklaus’s efforts helping pediatric care nationwide through the work of Children’s Miracle Network Hospitals.  Inspired by Jack and Barbara’s passion to improve healthcare for children, AHEAD and the Nicklaus Companies collaborated in creating a special yellow hat featuring the iconic Golden Bear logo and the new Play Yellow logo that Jack Nicklaus will debut at The Masters this week.  The hat will be available on Aheadusashop.com; every purchase will benefit the Children’s Miracle Network Hospitals with a direct financial contribution.
Last month, Jack and Barbara Nicklaus, founders of the Nicklaus Children’s Health Care Foundation, joined PGA Tour Commissioner Jay Monahan to launch the new Play Yellow campaign supporting the 170 Children’s Miracle Network Hospitals across the country with the goal to raise $100 million. The inspiration for Play Yellow stems from the yellow shirts Jack often wore in the final round of tournaments in honor of Craig Smith, the son of a close Ohio family friend who was battling rare bone cancer. Craig passed away in 1971 at the age of 13. Fifteen years later, on the morning of the 1986 Masters, Jack, at age 46, once again wore a yellow shirt, playing one of golf history’s most iconic rounds and winning his record sixth Green Jacket.

“When our friends at the Nicklaus Companies came to us and asked if there was anything we could create to support the new Play Yellow campaign, it was a very quick decision for us – Yes we can!” said AHEAD CEO Anne Broholm. “Jack and Barbara’s passion for helping children is beyond inspiring to us. We quickly worked to create something special in time for Mr. Nicklaus to wear next week.”

“We are thrilled to have AHEAD and the Nicklaus Companies step up and join our efforts for the $100 million Play Yellow campaign,” said Children’s Miracle Network Hospitals President and CEO, John Lauck. “We need companies that care to help us reach our goal.  Having Barbara Nicklaus on our Board is so important to us let alone the incredible work both she and Jack do to help children everywhere, especially those supported through the Nicklaus Children’s Health Care Foundation and the Children’s Miracle Network Hospitals.”

“Barbara and I are grateful to the team at AHEAD for joining us and many others in the Play Yellow effort to help make a difference in the lives of children, through Children’s Miracle Network Hospitals,” Nicklaus said. “Like us, AHEAD cares about giving back to children and families in need. They are not simply the best headwear company in golf, they are an organization of people with big hearts. Hats off to AHEAD!”

“There is a reason we have been partners with AHEAD for 20 years; they are simply the best and this is just another example of that,“ commented Howard Milstein, Executive Chairman of the Nicklaus Companies.  “We share a common mission in that both our companies are dedicated to giving back. And importantly, AHEAD can take an idea, turn it around and execute very rapidly as shown with our new Play Yellow hat being made available to the public in time for the Masters this week.”
………………………………
ABOUT AHEAD | www.aheadweb.com
Founded in 1995, AHEAD is a multi-dimensional brand with a proven track record of success distributing headwear, apparel, and accessories to the green grass, resort and corporate markets. Its single focus of providing quality products, with innovative, high-quality design, and merchandising concepts has led to more than 20 years of continued growth and expansion.
AHEAD has forged many key partnerships in the golf industry, including the USGA, PGA of America, PGA Tour, the Nicklaus Companies, Arnold Palmer Enterprises, and ANNIKA Foundation in addition to more than 5,000 green grass and resort shops throughout the world. Golf legends Jack Nicklaus and Annika Sorenstam wear AHEAD exclusively.