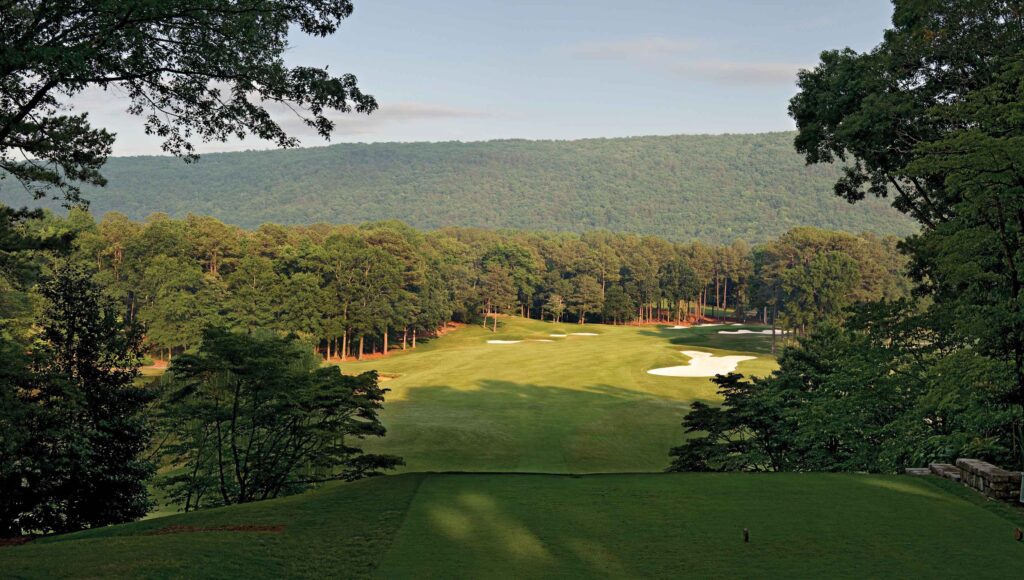 Jack Nicklaus’ acclaimed layout at Shoal Creek, which represents the Golden Bear’s first solo golf course design in the United States, will remain the host venue for the Regions Tradition, a major championship on the Champions Tour, through 2015 and will remain in Birmingham through 2018, according to a joint announcement by Regions Financial Corporation and the PGA TOUR’s Champions Tour.
“Over the years, the Regions Tradition has been much more than a world-class golfing event. It’s also been a source of community pride, supported numerous charities and generated millions in economic impact,” said Grayson Hall, Chairman, President and Chief Executive Officer of Regions Financial Corporation. “Regions is pleased to partner with the Champions Tour and keep this major championship in the Birmingham area for years to come.”
The tournament, which began in 1989 on the Jack Nicklaus-designed Cochise Course at Desert Mountain in Arizona and first came to Alabama in 2011, was originally intended to be played at Shoal Creek for just one year. Following a successful tournament in 2011, the club agreed to host for two more years. After recent negotiations, Shoal Creek will again host this year, on May 14–18, when David Frost will attempt to defend his title, as well as in 2015. The Regions Tradition will then relocate just a few miles away to Greystone Golf & Country Club for 2016, ’17 and ’18.
“Shoal Creek’s partnership with the Champions Tour has been an outstanding experience,” said Shoal Creek President Mike Thompson. “It’s an honor to host this major championship, the Regions Tradition. We thought we would host it for one year only, but has developed into five years.”
The Jack Nicklaus-designed layout opened for play in 1976, earning the distinction of being the Golden Bear’s first solo domestic design. It has been a 34-year mainstay on Golf Digest’s list of America’s 100 Greatest Golf Courses, ranking highest at No. 14 from 1985 to 1986 and most recently ranked within the list’s top-75.
“I will be forever grateful to Hall Thompson, because it was Hall who gave me one of my first opportunities to take a wonderful piece of property and create a special golf experience,” Nicklaus said of Shoal Creek’s original owner, Hall Thompson, the visionary who passed away in 2010. “He loved Shoal Creek as he loved his family, and in many ways, this club was an extension of the Thompsons.
“As wonderful a club as he created with Shoal Creek, Hall reached out to me in 2010 to talk about how to make the club and course even better than they already are. He had a great passion for what was there, how to maintain it, how to nurture it, and, at all times, try to do the right thing. Hopefully, Shoal Creek will forever represent part of the special legacy Hall Thompson has left behind, and it is only fitting that a championship with the word ‘tradition’ in it is attached to a worthy venue like Shoal Creek.”
In addition to hosting the Regions Tradition since 2011, the 7,154-yard layout has hosted two PGA Championships (1984, 1990), the 1986 U.S. Amateur, and the 2008 U.S. Junior Amateur.
“It’s tremendous that Regions Financial has made this commitment to keep the Regions Tradition in Birmingham,” said Champions Tour President Mike Stevens. “Our players hold this major championship in the highest esteem and they enjoy coming to Birmingham, a city where the Champions Tour has had a presence since 1992. The members of Shoal Creek have graciously allowed us to enjoy their facility for three years and we look forward to two more years, along with the knowledge that Greystone Golf & Country Club, which has successfully hosted Champions Tour events in the past, awaits us with a wonderful welcome.”
Moving this major championship to different locations in the same region is not uncommon. Two courses hosted The Tradition during its 14-year run in Arizona and two venues were used in the tournament’s eight years in Oregon. The championship relocated to Alabama in 2011 at Shoal Creek.
Regions’ association with the Champions Tour in Birmingham has benefitted Children’s of Alabama and local area charities significantly, donating more than $13 million in total since the first Champions Tour event was held in Birmingham in 1992. Of that $13 million, more than $2 million has been donated since the Regions Tradition came to Shoal Creek in 2011. According to the Birmingham Convention and Visitors Bureau, the estimated economic impact in Birmingham is almost $54 million from 2011 through 2014.
Each of the four rounds of the Regions Tradition will be broadcast live on the Golf Channel, the exclusive cable provider of the Champions Tour, reaching in excess of 205 countries and territories and more than 145 million households.