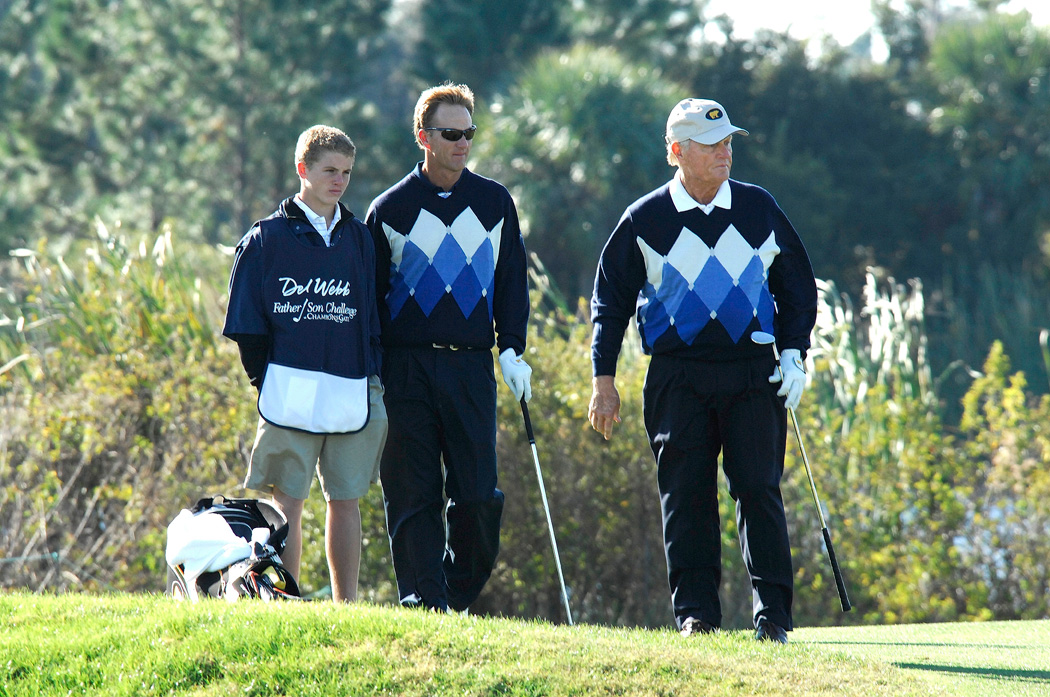 20-team field boasts 14 World Golf Hall of Fame members, 452 worldwide wins and 59 major championships
What beats a pair of Jacks? Three of a kind, of course.
Jack Nicklaus and his son, Jack II, headline a field full of World Golf Hall of Fame members, golf legends and their children when the PNC Father/Son Challenge tees off for the 17th time Saturday at The Ritz-Carlton Golf Club, Orlando, Grande Lakes. Jack Nicklaus III, age 24, will join his father and grandfather as caddie, making the Nicklauses the only team in the field to feature three generations.
“I cherish every opportunity I have to spend time with my children and grandchildren, whether it is golf, fishing, traveling together, or just getting together as a family for a Sunday dinner,” Nicklaus said. “To have the opportunity to get together on a golf course and in a competitive environment makes it even that much more special.”
“People ask me all the time what my dream foursome would be, and I tell them it would have to be a fivesome, so I could get all four of my sons in there. I don’t play much golf any more, but whenever one of the boys wants to play, I will be there. They enjoy playing and because of that, I do, too. It’s a special time each year when we can play a little golf together, but more important, have a lot of fun together.”
Tournament coverage of the PNC Father/Son Challenge will air on Golf Channel from 2 p.m. to 3 p.m. ET and on NBC from 3 p.m. to 6 p.m. ET on Saturday and Sunday. Golf Channel also will air a Pro-Am Special today at 4:00 p.m. ET.
Playing in his 12th PNC Father/Son Challenge this week, Jack Nicklaus will be joined by Jack II for the seventh time. At a combined 127 (74+53) years, they represent the oldest team in the field, followed by Dave and Ron Stockton at 117 years (73+44) and Raymond and Robert Floyd at 110 years (72+38).
Jack II was scheduled to play in the 2014 tournament, but had to withdraw due to health issues. He was replaced by his brother, Gary, who teamed up with the Golden Bear to tie for sixth.
“I don’t play golf anymore and Dad is 74 years old,” said Jack II, who serves as president of Nicklaus Design, “so, the likelihood of us being competitive isn’t really very high, but things could fall into place and we could play well. What it is really about is simply being out there with Dad—that’s the biggest thing. We’ll have family members and friends watching both of us. We’ll get to spend quality time together, whether it’s on the golf course, or eating dinner together in the evenings, or breakfast in the mornings prior to the rounds.
“It’s a bit of a flashback to when we used to watch Dad play in his competitive days. Obviously, it’s slightly altered because it’s a different time in his career, but it’s still pretty neat to be out there on the golf course. It will be special to see the crowd show its appreciation for my father, and be able to experience that again.”
Charles Schwab Cup winner Bernhard Langer, who won five tournaments on the Champions Tour in 2014, will also return to the PNC Father/Son Challenge, with son, Jason. They will be joined by defending champions Stewart and Connor Cink, NBC Sports analyst Johnny Miller and son, Andy, and a field of greats who amassed 452 worldwide victories and 59 major championships.
The family-oriented event, held for 15 years from 1995-2008, made a return in 2012 with a new title sponsor in The PNC Financial Services Group, Inc. The Cinks return alongside past winners and legends of the game including Larry Nelson (2004, 2007-08), Langer (2005-06), Hale Irwin (2003), Floyd (1995, 1996, 1997, 2000, 2001) and Nicklaus (1999). Miller, who last played with his son Scott in 2006, returns to the tournament after an eight-year hiatus.
The 20-team field competes in a scramble format over 36 holes for the $1 Million prize purse and the Willie Park trophy, named after Willie Park, and his son Willie Park Jr., who combined to win the British Open five times.
Golf Channel and NBC’s broadcast team will comprise Steve Sands and Gary Koch in the broadcast booth, joined by Peter Jacobsen from an on-course tower, and Roger Maltbie and Notah Begay III reporting from the course. Jimmy Roberts will conduct post-round interviews and deliver his signature essays.
2014 PNC Father/Son Challenge Field (bold denotes WGHOF)

The 2014 field also boasts 452 victories across the PGA and European Tours, including 59 major championships, and 14 World Golf Hall of Fame members. Over the 16 years of the tournament, 23 World Golf Hall of Fame Members have participated, averaging 68 percent of the professional field each year.
“We are pleased to once again welcome a strong field to the PNC Father/Son Challenge,” said Alastair Johnston, vice chairman of IMG, co-founder and producer of the event with NBC Sports. “Our tournament offers a unique look at the family bonds that so many of us associate with the game of golf and we are grateful to PNC and our local sponsors for making the Father/Son Challenge possible.”
“We are extremely proud of our heritage as co-founder of the Father/Son Challenge,” said Jon Miller, President, Programming, NBC Sports and NBC Sports Network. “Through the collective efforts of our partners at PNC Bank, Ritz Carlton and IMG, families nationwide can now share in one of the most special events in golf.”
To qualify for the PNC Father/Son Challenge, participants must have won either a major championship or THE PLAYERS in their career. The professional’s partner must not currently hold a Tour card, and while the majority of partners in the history of the event have been the sons of the golf legends, the family-themed tournament has seen daughters and grandsons participate over the years. In one poignant exception in 2008, a close family friend also participated when Payne Stewart’s son, Aaron, teamed up with Paul Azinger, Stewart’s long-time friend.
Tickets are still available by visiting pncfathersonchallenge.com or by calling 407-.761-5763. Children age 15 years and younger receive complimentary admission with an accompanying adult.