USGA announces premiere of ‘Nicklaus: The Making of a Champion’ - Nicklaus Companies
Skip to content 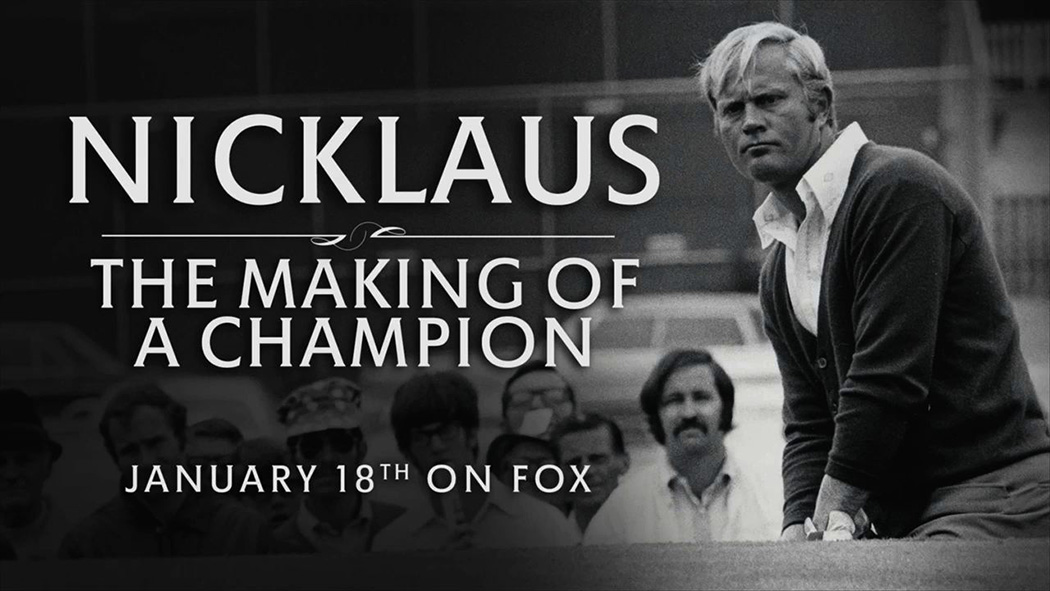 Documentary to air at noon EST, Sunday, Jan. 18, on Fox
Far Hills, New Jersey — The United States Golf Association, in partnership with Rolex, has announced the premiere date of “Nicklaus: The Making of a Champion,” a one-hour documentary produced by the USGA and Ross Greenburg Productions.
“Nicklaus: The Making of a Champion” will debut in the United States at noon EST, Sunday, Jan. 18, on the Fox Broadcast Network (check local listings) prior to its pregame coverage of the National Football League’s NFC Championship game. The film’s release also honors Nicklaus’ upcoming 75th birthday on Jan. 21.
“We’re proud to celebrate Jack’s legacy as the ‘Golden Bear’ approaches a milestone birthday,” said Thomas J. O’Toole Jr., USGA president. “His influence on golf can be seen in every player who followed him and every fan who enjoys playing and watching the game. This film tells the story of one of the game’s greats. It was our privilege to work with Ross Greenburg and Rolex to tell his story.”
The documentary chronicles the life, career and legacy of Nicklaus, winner of a record 18 professional major championships, including four U.S. Opens, tied for the most all-time. His eight USGA championships include two U.S. Amateurs and two U.S. Senior Opens.
The film explores the completeness of Nicklaus’ storied career, emphasizing the values he formed growing up in Columbus, Ohio, and continues to embody.
“I believe a hallmark of my career is that I always tried to look ahead, be it the next tournament, next championship or next mountain to climb,” Nicklaus said. “But through the lens of my career-long association with the USGA, and the creative vision of Ross Greenburg and his team, I allowed myself the opportunity to reflect on some very special times in my life and share some wonderful moments and memories that I will forever cherish. I don’t think my career, my life, would be the same were it not for the USGA championships that helped shape me as a golfer and person, and I thank the USGA for wanting to share those stories.”
Produced in partnership with 52-time Sports Emmy Award winner Ross Greenburg, “Nicklaus: The Making of a Champion” is narrated by accomplished actor and Emmy Award-winning narrator Peter Coyote, who has lent his voice to more than 125 films and documentaries, including the 2012 USGA documentary, “1962 U.S. Open: Jack’s First Major.”
“It is once again an honor to work with the USGA and Jack Nicklaus on a film that looks at the many reasons why Jack has won more major championships than any golfer in history,” Greenburg said. “This film also tries to capture the words and values that Jack lives by, as he continues to impact the game of golf around the world today. There are many icons, and then there is Jack Nicklaus.”
“Nicklaus: The Making of a Champion” features archival footage and interviews with family, friends and golf icons. The film’s list of interviewees includes his wife, Barbara; son Jack II, and daughter Nan, as well as golf legends Johnny Miller, Arnold Palmer, Gary Player, Lee Trevino, Tom Watson and Tiger Woods. Prominent golf journalist Mark Mulvoy and USGA Senior Historian Michael Trostel are also featured.
“Jack’s competitive spirit, integrity, self-belief, vision, commitment and perseverance gave him the foundation to turn his unquestioned talent into unmatched success, and helped make him golf’s greatest major champion,” Trostel said. “His achievements on the course were earned through a combination of skill, hard work and determination, but through it all, he always put his family first.”
The USGA will continue to celebrate Nicklaus’ career later this year with the May 27 opening of the Jack Nicklaus Room at the USGA Museum in Far Hills, New Jersey.
A preview trailer of the documentary film is available at https://bit.ly/nicklausfilm.
Exclusive content, including photographs and video clips, will be available on the USGA’s social channels, @USGA and facebook.com/USGA. Twitter followers are encouraged to use #riseofjack to enhance the viewing experience.
About the USGA
The USGA conducts the U.S. Open, U.S. Women’s Open and U.S. Senior Open, as well as 10 national amateur championships, two state team championships and international matches, attracting players and fans from more than 160 countries. Together with The R&A, the USGA governs the game worldwide, jointly administering the Rules of Golf, Rules of Amateur Status, equipment standards and World Amateur Golf Rankings. The USGA’s reach is global with a working jurisdiction in the United States, its territories and Mexico, serving more than 25 million golfers and actively engaging 150 golf associations.
The USGA is one of the world’s foremost authorities on research, development and support of sustainable golf course management practices. It serves as a primary steward for the game’s history and invests in the development of the game through the delivery of its services and its ongoing “For the Good of the Game” grants program. Additionally, the USGA’s Course Rating and Handicap systems are used on six continents in more than 50 countries.
For more information about the USGA, visit www.usga.org.