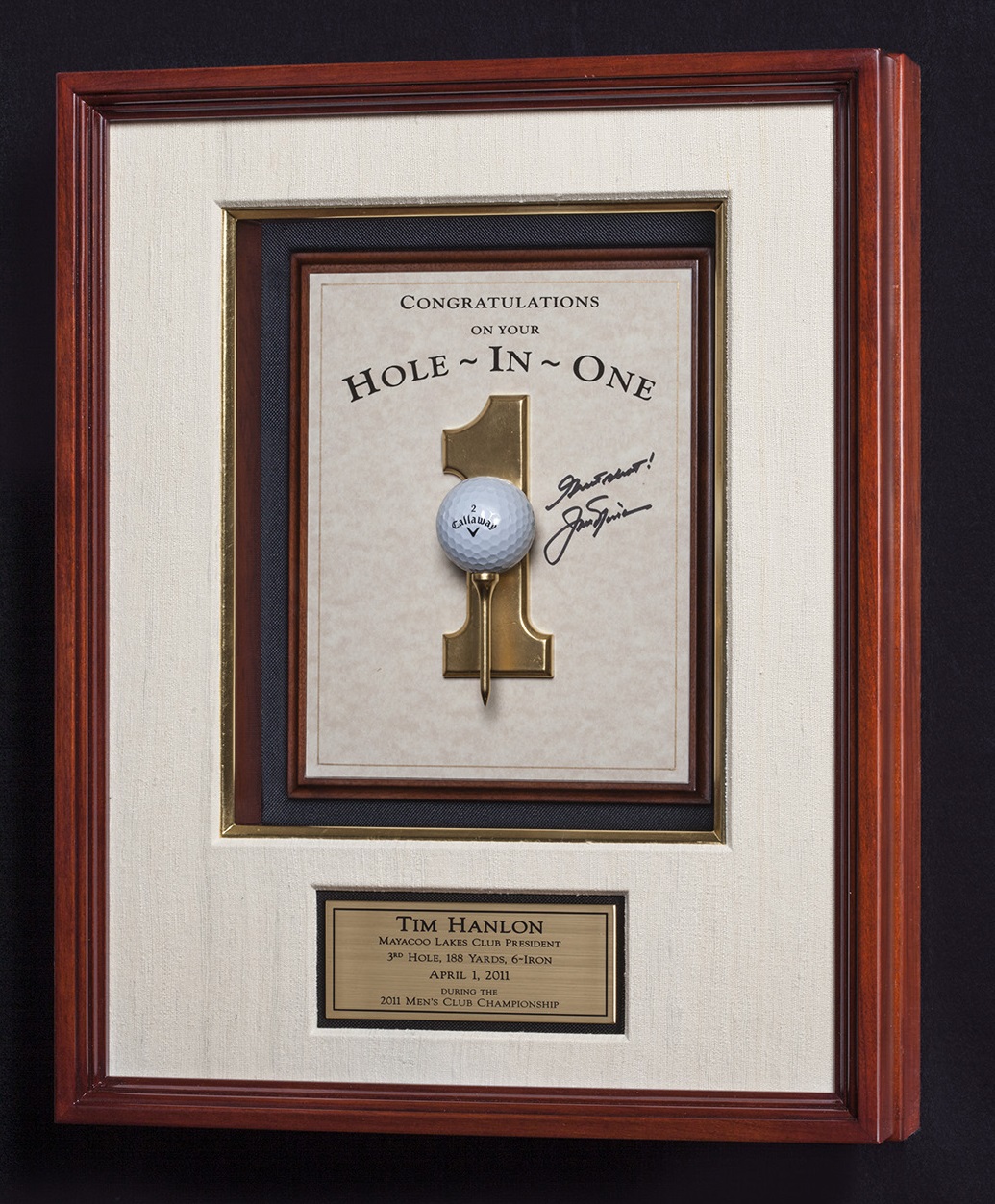 Commemorate your shot of a lifetime with a personal autograph by the greatest golfer of all time—Jack Nicklaus—who scored 21 hole-in-ones during his record-setting professional career, including his first on the grounds of Augusta National in 2015 at age 75.  Morell Studios is the official hole-in-one licensee of Jack Nicklaus. Each hole-in-one plaque includes a Certificate of Authenticity and hologram sticker from the Nicklaus Companies, plus a handwritten “Congratulations” from the Golden Bear.
“Pat Morell has delivered consistently high quality workmanship for us and for Nicklaus Design golf courses around the world,” said Jack Nicklaus, whose company has been working with Morell Studios since 1981.
Looking for that very special anniversary, birthday or congratulations gift? Each plaque is custom manufactured to include the specifics of each hole-in-one on a solid brass plate. The golf ball is displayed under glass and the plaque features an American dark cherry frame, 24K gold leaf border and hand-wrapped imported silk mat.  Click here to order.
Pat Morell, founder and creative director of Morell Studios, has spent his entire career perfecting and developing unique product lines for the most discerning customers. Morell Studios has enjoyed over 40 years of experience providing museum quality custom awards, plaques and trophies to the most prestigious clubs and corporate organizations, including The Bear’s Club (Jupiter, Fla.), Muirfield Village Golf Club (Dublin, Ohio) and The PGA of America.
Morell began his design and woodworking career in the luxurious segment of the yacht industry. The woodworking techniques inherent to the marine industry require intricate detail in design, craftsmanship, assembly, and finishes. He has applied his extensive knowledge of woodworking, carving, engraving, and custom paints and finishes to the creation of a stunning product line of awards and plaques. Morell contributed to the creation of the first floating Nicklaus museum, when he helped convert Sea Bear several years ago into a tribute to the career and life of the Golden Bear.
Every Morell Studios product and all of its components are manufactured in the U.S. and assembled at the production facility in Florida under Morell’s direction. The company’s design studios include an experienced team of woodworkers, engravers and finishers.