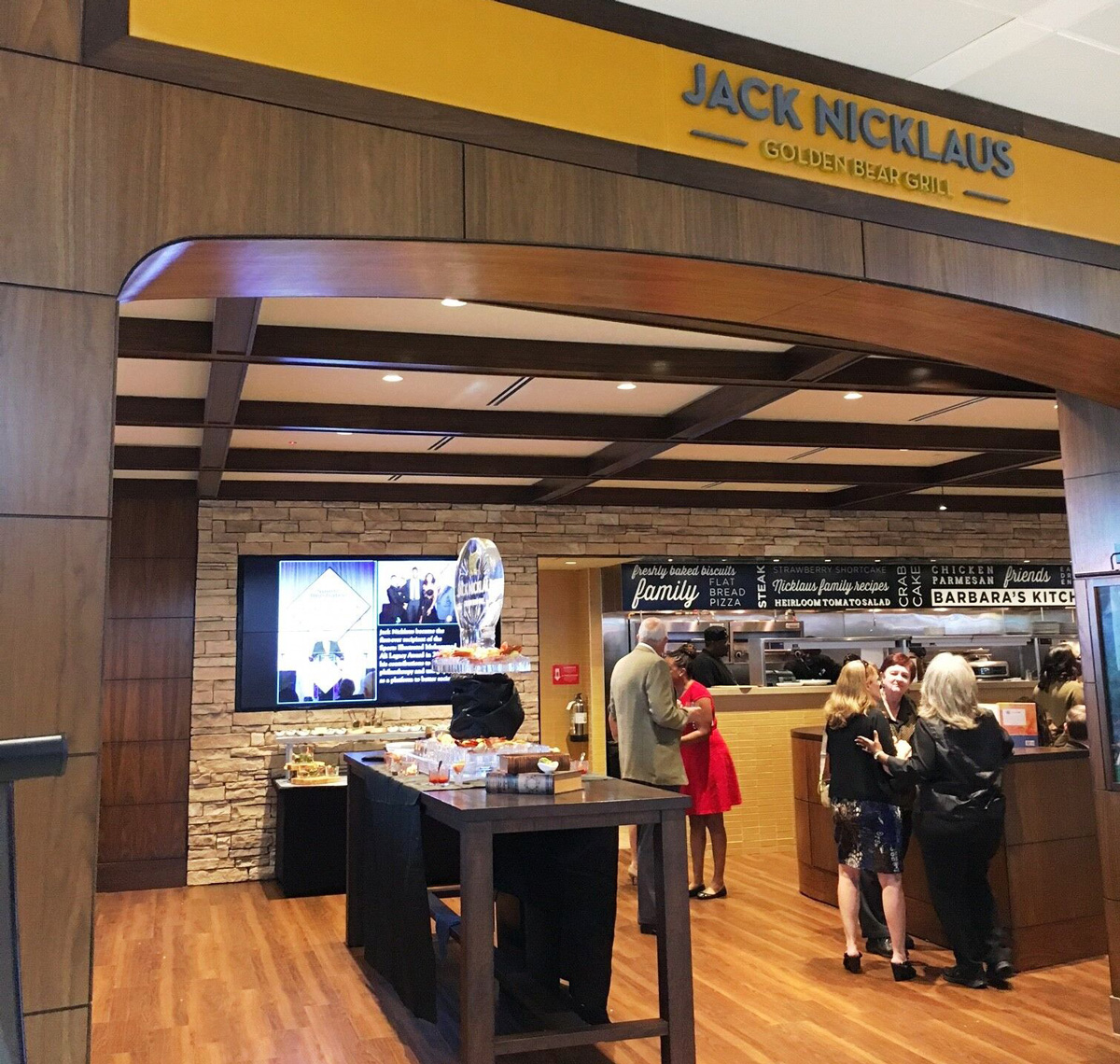 CHARLESTON, S.C. – Golf icon Jack Nicklaus and Delaware North, a global hospitality and food service company, today formally celebrated the grand opening of the Jack Nicklaus Golden Bear Grill at Charleston International Airport (CHS) in South Carolina, a 1,234-square-foot restaurant space that seats up to 80 guests in the airport’s main terminal. The restaurant began operations in September as part of the airport’s ongoing Terminal Redevelopment and Improvement Program, becoming the second Jack Nicklaus-branded restaurant to open this year. The restaurant concept was introduced in July 2016 at Fort Lauderdale-Hollywood International Airport in Florida.
Today’s grand opening was marked by a ribbon-cutting ceremony, a VIP event, and a Q&A with area media. Special guests were Jack Nicklaus and his wife, Barbara; Executive Director and CEO of Charleston International Airport, State Senator Paul Campbell Jr.; former Charleston Mayor Joe Riley; officials from CHS and the Airport Employment and Training Center; and members of the Nicklaus family. In addition, country music star Darius Rucker stopped by to congratulate Jack and Barbara.
“Barbara and I were thrilled with what we saw today, with the second Jack Nicklaus Golden Bear Grill to open,” Jack Nicklaus said. “First of all, the renovations and improvements to the Charleston airport are tremendous, and it’s a beautiful venue. The restaurant is ideally located in the main terminal and you could sense the interest and energy of customers.”
The Golden Bear Grill is beautifully decorated with memorabilia and at least 15 Nicklaus family photos hand-selected by Jack and Barbara to connect customers to the storied legacy of golf’s greatest champion, ambassador, course designer and philanthropist. The restaurant not only celebrates the game of golf, it also celebrates the life and lifestyle that surrounds the game. Jack’s wife Barbara worked closely with Delaware North’s concept and design team to create the warm, inviting and comfortable interiors.
The menu was also a collaboration between Barbara and a team of chefs—with many of the recipes featured coming from Barbara and her daughter Nan’s cookbook, Well Done! Items such as “Jack’s Favorite Greens,” a salad with romaine and iceberg lettuce, gorgonzola, red onion and smoked bacon; meatloaf; chicken parmesan; and “Buckeyes,” a chocolate peanut butter treat paying homage to Jack and Barbara’s home state of Ohio, are some of the menu’s featured items that originated in the Nicklaus family’s home kitchen. This close and personal connection to the Nicklaus family and their lifestyle is further emphasized by the restaurant’s kitchen—aptly named “Barbara’s Kitchen.”
“Our friends at Delaware North have done a great job with the layout, design and interiors,” Jack added. “If comparing it to our first restaurant in Fort Lauderdale, the Charleston Golden Bear Grill has its own personality and touches, but Delaware North took great care in maintaining a consistency of look, feel and functionality. The most important element of consistency we witnessed today was the level of quality and friendliness in the staff and service, and the excellent menu and execution. We are very pleased and proud.”
Many Nicklaus-branded products are for sale at the restaurant including Jack’s House and Jack Nicklaus Private Reserve by Terlato Wines; three flavors of Jack Nicklaus Ice Cream by Schwan; and Jack Nicklaus AquaHydrate Water. The Well Done! cookbook is also available for restaurant patrons who want to cook like the First Lady of Golf and eat like the Golden Bear—or who are simply looking for a quick gift before reaching their destinations. The restaurant also features an optional round-up for charity program benefitting the Nicklaus Children’s Health Care Foundation.
About Delaware North
Delaware North is one of the largest privately-held hospitality and food service companies in the world. Founded in 1915, Delaware North has global operations at high-profile places such as sports and entertainment venues, national and state parks, destination resorts and restaurants, airports, and regional casinos. Delaware North has annual revenue of $3 billion in the sports, travel hospitality, restaurants and catering, parks, resorts, gaming, and specialty retail industries. Learn more about Delaware North, a global leader in hospitality and food service, at www.delawarenorth.com.