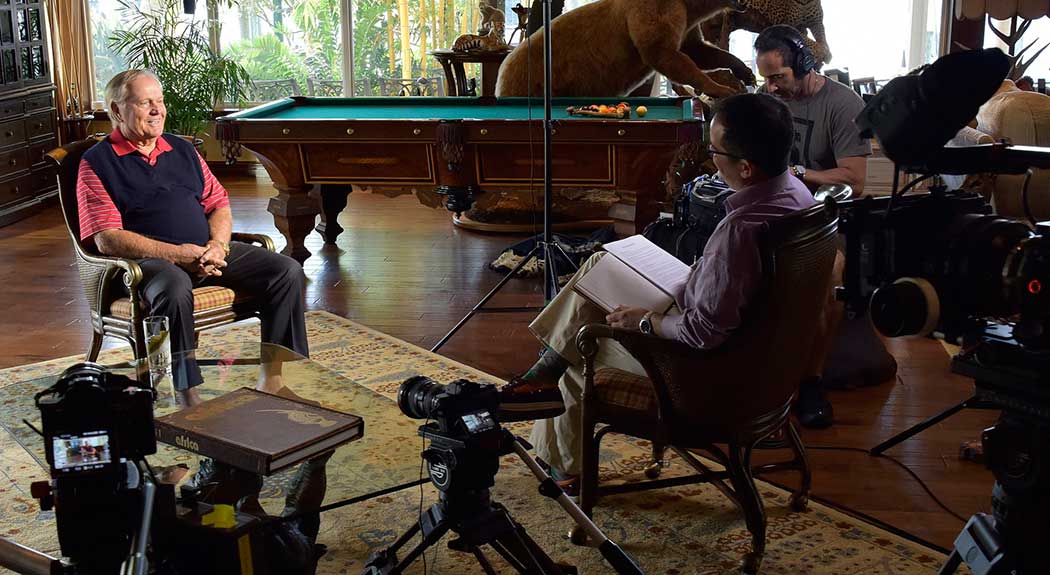 The product of nearly 100 interviews and hundreds of hours of archived film, Jack blends recollections from Nicklaus, as well as his playing competitors, family members, sports legends, business partners, and childhood friends, along with golf and sports media. Also included are signature moments from a storied career to capture the essence of an individual who forged a permanent mark as the most accomplished golfer of all time. Additionally, Jack will feature other “Greats of All Time” in their respective sport, each weighing in on Nicklaus’ impact on the larger sporting landscape, including Wayne Gretzky, Richard Petty, Jerry Rice, Annika Sorenstam and Kelly Slater.

“Jack is a project that Golf Films has spent years developing in order to comprehensively capture the career and legacy of golf’s most accomplished champion,” said Mike McCarley, president, Golf, NBC Sports Group. “At the heart of the film is a commitment to high-quality, personal detail captured through nearly 100 interview subjects recounting signature moments over the course of Nicklaus’ career in order to help shape a definitive biopic that accurately reflects Mr. Nicklaus’ legacy in golf and in sport.”
The three parts are segmented chronologically:

⦁ Prodigy (Sunday, April 9 – 9 p.m. ET) – Beginning with Nicklaus’ childhood upbringing, highlighted by the Golden Bear’s relationship with his father (Charlie), meeting his wife (Barbara) in college at Ohio State, and his early successes as a professional golfer.
⦁ Prime (Monday, April 10 – 9 p.m. ET) – The bulk of his on-course career accolades inside the ropes, led by his record 18 professional major championships and 73 PGA TOUR victories.
⦁ Pinnacle (Tuesday, April 11 – 9 p.m. ET) – Focusing on his lasting legacy as an ambassador for the sport, the priority he placed on family, and his business and philanthropic endeavors, including global golf course design and the hospitals bearing the Nicklaus name.

As a longtime partner of Nicklaus – as well as the sponsor of his Memorial Tournament – Columbus-based insurance and financial services company Nationwide will serve as the presenting sponsor of Jack, which will allow for the three-part film to air with limited commercial interruption.

“Jack Nicklaus is considered the greatest golfer to ever play the game, but his successes can be measured by more than just wins on the golf course,” said Steve Rasmussen, Chief Executive Officer, Nationwide. “Counted among his accomplishments is the work that he has done for charity, particularly with pediatric hospitals like Nationwide Children’s Hospital in Columbus, Ohio. Nationwide is proud to partner with Golf Channel to share Jack’s story with his fans and the world.”

“He was the best – always moved the needle. If you had anything to gauge your game by, you looked at the Golden Bear.”
– Six-time Major Champion Lee Trevino

Jack utilizes accounts from Nicklaus gathered over numerous sit-downs at his South Florida home during the past 18 months, and showcases an unprecedented video collection of rarely seen broadcast footage from his record 18 major championship victories. The film also offers unique first-hand accounts from individuals on the ground at different vantage points during each respective major victory. A section of the film additionally will pose the question of who is the greatest golfer of all time, Jack Nicklaus or Tiger Woods, and feature insight from fellow Tour professionals and media, including consideration to whether Nicklaus’ record of 18 majors will ever be equaled, or broken.

The film will give viewers a sense of Nicklaus the competitor, offering insight from swing experts on the physical traits that poised him for sustained success, along with an examination from psychologists on his unyielding resolve to finish ahead of his contemporaries. Jack also will incorporate collectibles from the site of each of Nicklaus’ 18 major championship victories. Utilizing vintage items collected by Golf Channel to help tell the stories of the Golden Bear’s most identifiable achievements, items collected span from his first professional major title at age 22 in the 1962 U.S. Open at Oakmont through his final major at age 46 in the 1986 Masters, 24 years later.

Jack is being produced by Golf Films, led by 13-time Emmy Award-winning coordinating producer Israel DeHerrera, who also served as the lead producer for the critically acclaimed, three-part Arnie film in 2014 on Arnold Palmer, which stands as the most-watched original production in Golf Channel’s 22-year history. Other award-winning projects produced by Golf Films include the Emmy-nominated Payne, on the late Payne Stewart; Arnie & Me, a follow-up fourth installment of Arnie; ’86, a chronicle of Nicklaus’ final major championship win at the 1986 Masters that aired to coincide with the 30th anniversary of his iconic win; and Ben Crenshaw: A Walk Through Augusta, on the two-time Masters champion, and his special relationship with the tournament.