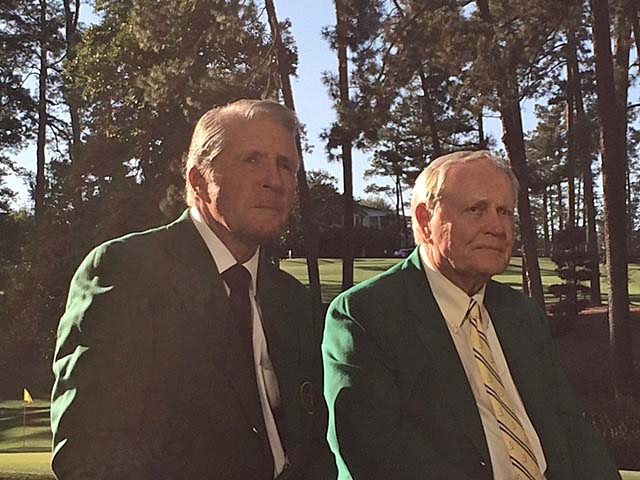 Record six-time Masters champion Jack Nicklaus and his good friend Gary Player, a winner of three Green Jackets, will hit ceremonial tee shots to start the 81st Masters Tournament around 7:45 a.m. ET on Thursday, April 6. Missing from this decades-old tradition will be fellow “Big Three” member and four-time Masters champion, Arnold Palmer, who passed away last September at the age of 87.
Palmer hit his last ceremonial tee shot at Augusta National in 2015. To honor Palmer at Thursday’s Honorary Starters Ceremony, every patron on the tournament grounds will receive a Commemorative Badge that says, “I am a member of ‘Arnie’s Army,’ Est. 1959.”
Ahead of hitting the tournament’s opening tee shot, the Golden Bear said Palmer was very well represented at the Champions Dinner on Tuesday during Masters Week when all but one living Masters champion assembled for one of the greatest annual gatherings in golf.
“We all miss Arnold. He may not have been there, but he was there in spirit,” Nicklaus said. “I think it was a very nice evening. The fellas had a very great feeling for Arnold and what he did for the game.”
Nicklaus joined ESPN’s Mike & Mike Wednesday, where the popular show hosts asked him how this year’s Masters Tournament will be different without his long-time competitor and friend.
“We’ll miss Arnold. I think everybody will miss Arnold,” Nicklaus said. “But, you know, life goes on. Gary and I will take the first tee. I’m sure the ceremony will be good. We’ll have a good time. We’ll hit drives. We’ll find out who’s going to hit the longest drive—that’s Gary’s biggest deal. He said he won his fourth Green Jacket last year when he outdrove me. So, he wants to win a fifth this year.”
And there you have it—even at 77 and 81 years old, respectively, and missing a third of golf’s greatest triumvirate of friends and competitors—Nicklaus and Player will vie for bragging rights.
“Chuffed when you know keeping in shape just helped you drive by your friend’s ball,” Player joked on Twitter, to hint at an unofficial Honorary Starter long-drive competition.
Nicklaus, who won his last Green Jacket at 46 years old to become the oldest winner in Masters history, ignored the Black Knight’s social media teasing. “Gary works pretty hard at trying to keep himself fit and so forth. I have to say I’m not quite that way,” the Golden Bear said. “We have a lot of fun. We’re good friends and we like to kid each other a lot.”
The Honorary Starters tradition will be available to watch on masters.com.
“I don’t know how many people realize how much Arnold took me under his wing when I was 20, 22 years old. When I first started on TOUR, Arnold was very good to me,” Nicklaus said. “He was very kind to a young guy starting out. I appreciated it very much. We had a lot of great times together. We traveled a lot together… He taught me a lot of things about how to handle myself.”